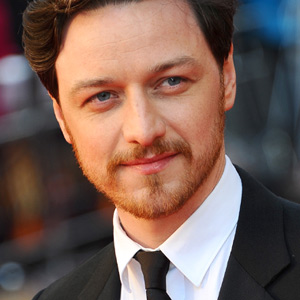 After a couple of years off, James McAvoy has the leading role in three big British films in 2013. First is the American-style London cop thriller Welcome to the Punch, opposite Mark Strong, then he teams up with Danny Boyle for the action movie Trance, and later this year he leads the starry cast of Filth, based on the notorious Irvine Welsh novel. Meanwhile, he's been getting rave reviews in the title role in Shakespeare's Macbeth on a London West End stage before he rejoins the X-men for the super-sequel Days of Future Past.

You've been getting great reviews for Macbeth.
We've done really well. But it's the most physical thing I've ever done - ever! Including any action movie. So to do it for two-and-a-half hours straight every single night, eight times a week, I'm literally falling to pieces at the moment! Proper aches and pains. I nearly broke someone's knee the other night, and they nearly broke my face.

So playing a gun-toting London cop in Welcome to the Punch was a breeze?
Yes, this was a total laugh, largely thanks to [director] Eran Creevy, who's a lovely guy to work for. So passionate, so enthusiastic. He's like Danny Boyle in that respect, because the enthusiasm and the energy flies off him and kind of spears us all.

So what drew you to the project?
The fact that it seemed very determined not to be your usual geezer, gangster, "street", apples-and-pears London crime thriller. I've seen lots of them be great as well, but its willingness to not rely on Britty grittish - erm, gritty British realism - is something that seemed refreshing. And although it is definitely taking strong points from the Hong Kong action genre movies and from Michael Mann, which Eran is totally open about, it felt quite fresh in terms of what Britain produces.

You've been able to stay home in Britain a lot lately.
I've just been very lucky that, over the last couple of years, the three films I've done in Britain happened to have offered me very diverse roles. I like to work here, and if I'm forced to go abroad because the work isn't interesting enough - or if there just isn't the work - then I will go abroad. And I'm happy to do that too. But I think we all want to work in our back yard.

Especially if you have a family.
Yes, it's always difficult to go away as a family person. But you sort of weigh it up. An X-men is definitely a time to go, because that's a big one that potentially guarantees work for me for the next few years. The fact that I did one X-men meant that I could do a couple of movies and then take a break, because I knew I would have X-men coming again in 2013. So those ones you can go abroad for. But if I'm going to do small films, it seems I should be doing them in my own back yard rather than going here, there and everywhere to make independent films in somebody else's country. You know what I mean?

Is it getting more difficult to maintain your privacy?
No, not really. Paps don't really bother me. I get stopped but people are nice. I don't mind that - I've never minded that. It's just the separation of family life, relationship and child. I think my wife [actress Anne-Marie Duff] and I use the media as much as we have to, but I don't think we abuse it. I've nothing against people who use it much more to forward their careers, but some people use it desperately. You can be on Twitter and use the media respectfully, but I just choose not to. I don't know, I'm only 33 but I feel like I'm 133! So no. Facebook, Twitter? Nothing. HD telly? Not even got one of them!

Do you enjoy getting back to the stage in between films?
Yeah, I think I do. I think when you're in a really good play, there's nothing better. But put me in a bad production of a bad play, and please God get me to the nearest X-men movie!