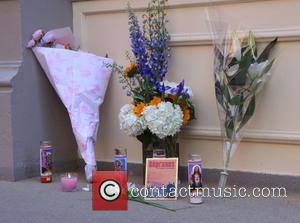 James Gandolfini's The Sopranos co-star Joe Pantoliano has opened up about his late pal, revealing he voiced his concerns about the actor's eating habits when they were working together on the Tv drama.

Pantoliano recalls filming one dinner scene with Gandolfini, during which his heavyweight castmate grazed on steak for hours take after take.

He tells Tv news show Extra, "I was worried about the way he ate... I said, 'Do you know how much cholesterol is in there?' and he said, 'Hey, 25 per cent of my arteries are blocked... 75 per cent still work!'"

The actor then choked back tears as he paid tribute to Gandolfini, who suffered a heart attack and died in Italy last week (19Jun13), adding, "I hope he knew that I loved him... The guy was a powerhouse... He's a modern day James Dean and like James Dean and like Marilyn Monroe, sometimes God takes these people away from us because maybe he's afraid that we'll take them for granted."

Pantoliano will be attending Gandolfini's funeral in New York on Thursday (27Jun13).