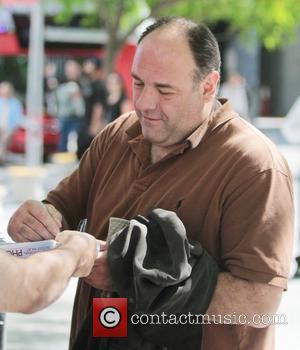 James Gandolfini has heard it all before -- complaints from Italian-Americans about being portrayed as gangsters. Those complaints recurred with every new season of The Sopranos . Now Gandolfini is hearing them as he joins the cast of the Nickelodeon film Nicky Deuce, based on a children's book by former Sopranos cast member Steven Schirippa and co-author Charles Fleming. On Monday, the Italian-American One Voice Coalition called on Nickelodeon to halt production of the movie. In a statement, the group's president, Andre DiMino, said, "These trash-television purveyors now want to brainwash a new generation with this insidious and hurtful stereotype of Italian Americans. ... We are appealing to all parents -- please, don't let your children watch this garbage." The story concerns a nerdy teenager who spends a summer with his Italian grandparents in Brooklyn, whom he suspects of being members of the Mafia. Gandolfini reportedly portrays a shady character in the neighborhood who becomes involved with the teenager. Other Soprano cast members appear in cameos in the film, including Michael Imperioli, Tony Sirico and Vincent Curatola. "It is beyond reprehensible that a children's network like Nickelodeon would so grossly abdicate any semblance of corporate responsibility and target young children with a racist, stereotypical movie on Italian Americans," DiMino said.