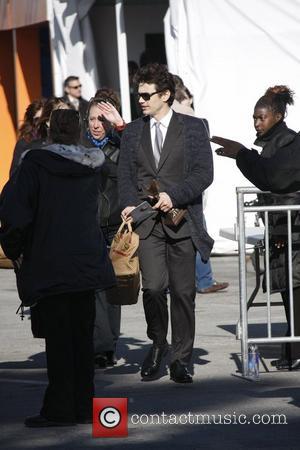 James Franco's representative has shot down reports the actor fled the Oscars on Sunday night (27Feb11) after falling out with co-host Anne Hathaway and producers during the ceremony.
Reports suggest the actors weren't exactly best friends backstage at the Academy Awards - and tabloid reports suggest Franco and Hathaway didn't get along at all.
They appeared all smiles in promotional skits for the Oscars and onstage during the ceremony, although Franco appeared to be less than happy as the evening wore on.
When the show was over, Hathaway partied in Hollywood and joined the Oscar winners who were part of Oprah Winfrey's post-show TV special, while her co-host jumped on a plane and jetted back to the East Coast to attend classes.
She told Winfrey, "I don't know if you know, but in addition to hosting the Oscars and being nominated himself, he's also, like, a student at two different universities... I think he's out (at class) now... As soon as the show was done he hopped on a plane... I just partied."
Franco has yet to speak about his Oscars night experience but sources tell Us Weekly magazine that he and Hathaway grew to "hate each other" during the rehearsals for the Oscars.
A backstage source tells the publication, "She had to provide all the energy."
Franco even skipped his own post-Oscars party in Los Angeles, where he had been planning to host a select group of stars and industry executives.
The source says, "He went immediately back to Nyc because he was p**sed about how the show went."
But a rep for the 127 Hours star, who was also among the losing Best Actor nominees, says, "This is absolutely not true."
Meanwhile, Hathaway's rep says, "Anne had a wonderful experience with him."