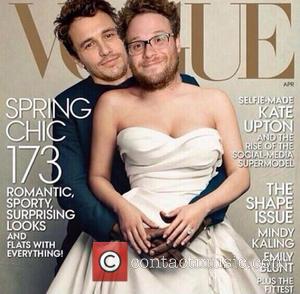 Picture: James Franco and Seth Rogen once again poke fun at Kanye West and Kim Kardashian with this parody of the couple recent Vogue cover -...

Actor James Franco reportedly attempted to woo a Scottish schoolgirl this week (begs31Mar14) after meeting the teenager following a performance of his new Broadway play Of Mice And Men.

The 127 Hours star posed for a photo with Lucy Clode, 17, after she attended his stage show during a vacation in New York, and the pair hooked up on Instagram.com after she posted the 'selfie' picture online.

In screenshots of the exchange, which have appeared on the Internet, Franco asks the girl her age, who she is travelling with and if she has a boyfriend.

He then asks for her number and offers to book a room at the hotel she is staying at with her mother, before Clode turns down his offer and writes, "I'll come back when I'm 18... Well this is a story my Scottish friends will never believe".

When she asks him for photo proof that the person she is corresponding with is in fact the Oscar nominee, he responds by sharing a shot of himself holding up a sign with her name written on it.

On Wednesday (02Apr14), Franco, 35, attempted to distance himself from the controversy of his online chat with a teenager by uploading a picture of himself on his Instagram.com page, with the words, "Why are you thirsty for underage ones?", plastered across the image.

In the accompanying caption, he writes, "I'm not! I hope parents keep their teens away from me. Thank you".

It is not yet clear if Franco staged the exchange as part of an odd promotional stunt for his new film Palo Alto, in which he stars as a soccer coach who seduces his 14-year-old student, played by Emma Roberts.

The movie is set to premiere at the Tribeca Film Festival in New York later this month (Apr14).