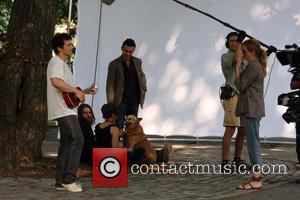 Actor James Franco is looking to further his education after completing his masters degree - he's enrolling in a doctorate program.
The studious star is currently studying filmmaking at New York University while juggling writing classes at Columbia University for a masters of fine arts diploma.
But Franco's thirst for knowledge is seemingly insatiable - he's set to obtain his Ph.D. and is checking out courses at Connecticut's prestigious Yale University.
He tells the Yale Daily News, "I'm applying to Ph.D. programs next year so I came out (to Yale) to see what the program was like."
And the 31 year old admits he has endured awkward encounters with fellow students who feel uncomfortable sharing the campus with a celebrity.
He adds, "I had a little incident last night at Columbia that was unpleasant. For the most part the programs I'm in are pretty small. There are about 30 to 40 people in each of my programs. So I know it's not awkward. And I have friends in the programs and all of that. It feels normal to me. It's when I take classes outside of the programs or go to the library where I'm mixing with people that I don't know or don't see in class everyday that I get some weird reactions.
"Columbia has a great library, the Butler Library, and I don't think I can go in there anymore. Because last night I went in, I went into the restroom and this guy was in there and he's like kind of mumbling like, 'You're James Franco, right?' I'm like, 'Yeah, how's it going?' Basically, he didn't get angry. He said he was annoyed with me that I came to the library and that there are girls in the library. He didn't express himself. I think what he meant was that he thought I came to the library to meet young girls and he said it wasn't fair. And I tried to apologise for any disruption my presence had, but he was still annoyed. So I left and I went to the writing building, which is a little more private, but I have to sit there alone in the dark."