James Corden Wants To Write More 'Gavin & Stacey'! But Will He? 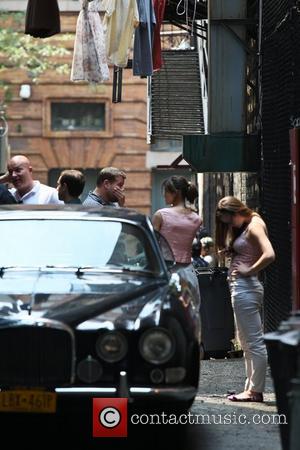 Picture: James Corden and Kiera Knightley on the set of their new movie 'Can a Song Save Your Life' in Kips Bay, Manhattan. New York City,...

James Corden has revealed his wishes to write more of the hit British comedy series 'Gavin and Stacey' following the show's end in 2010.

The actor wrote the sitcom with Ruth Jones who also stars in it as his love interest. Corden thinks the show was much too good not to make some sort of a comeback in the near future. 'It would be a crime not to, it's a great show', he told the Daily Mail. 'Writing with Ruth is a gift, I definitely plan on doing some more.' The series ended on a high note with Corden's character Smithy getting together with Jones' character Nessa after a long struggle and Gavin and Stacey (played by Mathew Horne and Joanna Page) announcing that they have a child on the way. The show impressed people so much, that 14,000 fans signed an online petition for it to return back to our screens.

However, after a brief spurt of excitement from viewers, Corden took to Twitter to confess that no plans are actually being made for a 'Gavin and Stacey' special. 'Getting loads of messages about a Gavin and Stacey special. Im sorry to say there are no plans right now im afraid, but maybe one day! X', his message read.