Quote: "He has a bunch of guys (and) most of them are, like, a world champion bicyclist and of course (his wife) Gabby is a world champion volleyball (player)... They're extreme. I call myself the Laird-a**... It's in the pool, 13-feet deep with the weights up to 40 pounds... and you have to get those weights to the surfaces and you have to swim across the pool with them... It's amazing." Veteran actor James Brolin has recruited big wave surfer Laird Hamilton as his fitness trainer.

Quote: "What a little sweetheart... I thought she was, like, some ethereal ghost. What a great, little girl. She lives about four blocks from us (in Malibu) and John (Travolta) said, 'I want you to meet this lady'... They're both totally fascinated with each other." James Brolin reveals his wife Barbra Streisand and their recent dinner guest Lady Gaga have become fast friends, fuelling rumours suggesting the two divas are teaming up to bring the musical Gypsy to the big screen.

Quote: "It's not easy. It's work, but it comes with rewards. You really have to pay attention to the other person and have kindness in your heart." Barbra Streisand shares the secret to her 16-year marriage to James Brolin.

Fact: Hollywood power couple Barbra Streisand and James Brolin have recruited former U.S. President Bill Clinton to help host their upcoming charity benefit. The Follow Your Heart event, to be held at the Evergreen hitmaker's Los Angeles home on 14 June (12), will feature musical performances by Josh Groban and David Foster. Proceeds will be donated to the Women's Heart Center at Cedars-Sinai Medical Center, where Streisand founded a research and education programme.

Quote: "The fact that he got together with her and found this solace is such a coup and so wonderful. The guy was so frigging unhappy and lonely. She's always like, 'Come over. We'll have cake or cocktails or soup or ice cream.' I love her and I love what they've created together. I say thank God for her." Josh Brolin is a big fan of his father James Brolin's wife Barbra Streisand.

Quote: "We never read the books but we saw two of the movies. It's not like we didn't like it. It's just we didn't get into it. I would love to give it another chance and sit one afternoon and watch them together, one after the other, and really, really concentrate." James Brolin admits he and wife Barbra Streisand are not huge fans of the Twilight film series.

Quote: "He's perfect. He has the most beautiful bone structure." Barbra Streisand on husband James Brolin. 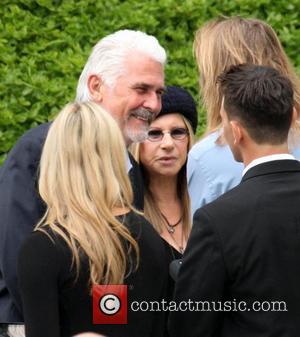