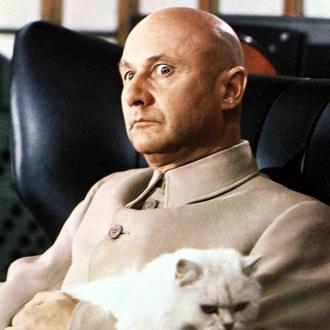 Ernst Stavro Blofeld - also known as Number 1 - is the German evil genius at the head of the global criminal organisation SPECTRE who was seemingly killed off in 1981's 'For Your Eyes Only'.

Speculation is sky high the criminal mastermind will appear in new Bond film 'SPECTRE' - due the movie's title - and 007 legend Moore thinks if he does return to the franchise his nationality will change because the world is too politically correct to demonise certain nationalities as evil any more.

When quizzed whether Blofeld's come back was likely, he said: ''Why not? But SPECTRE is very different with today's world. What nationality do you make the villain? You must not cause offence.

''The fact is that Hollywood sees the English play the villains. It means a lot of English actors get work.''

Moore, now 87, portrayed the British secret agent for seven movies from 1973 to 1985 and he admits the villains in the 007 universe have to change because the world is a different place now.

In an interview with the BBC, he said: ''After we became friendly with Russia it was difficult to have Russian villains and we can't have Chinese villains as we want them to spend their money here (in the UK).''

It has been hotly rumoured that German-born actor Christoph Waltz will turn out to be Blofeld in 'SPECTRE' but the two-time Oscar winner has denied it and is officially cast as Franz Oberhauser.

'SPECTRE' - starring Daniel Craig as James Bond for a fourth outing - hits UK cinemas on October 26 and across the rest of the world on November 6.