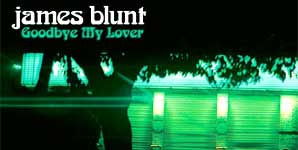 2005 – the year of James Blunt. With the biggest selling album of the year, the third best-selling single with 'You're Beautiful' and a coveted MTV Award for Best New Act, James has emerged as the UK's brightest singer/songwriter talent. Following his recent UK tour, he returns with the brand new single 'Goodbye My Lover' on December 19th.

Taken from his Number 1, debut album 'Back To Bedlam' which is now approaching sales of 2 million, the track encapsulates James' distinctive sound with beautiful melodies and heartfelt emotions. Written by James with additional music by Starbek, 'Goodbye My Lover' was produced and mixed by Tom Rothrock (Badly Drawn Boy) and features a stunning video that was shot in Los Angeles by Sam Brown and stars The O.C actress Mischa Barton.

The single is available on three formats – CD, Enhanced CD and 7" vinyl. The CD offers the previously unreleased B-side 'Close Your Eyes' which was written by James; the enhanced CD
features the video and a 'making of' feature, while the 7" vinyl contains live recordings of 'Goodbye My Lover' and one of the concert highlights – his cover of The Pixie's 'Where Is My Mind'.

James recently won a Q Award for Best New Act and continues to gain increasing success throughout Europe and America. His debut album is climbing the US Billboard chart following its release there in October, where he played two sold-out shows at New York's Bowery Ballroom earlier this month.

'Back To Bedlam' was recently certified 7-times platinum and continues to break UK chart records. Not only is it still in the Top Ten, but it has also overtaken Coldplay's X&Y to become the best-selling album of the year. It is also the first album to simultaneously climb to Number 1 with an accompanying single since John Lennon in 1980.