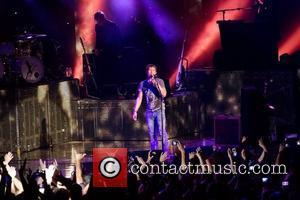 British singer James Blunt was caught up in a major flight scare on Thursday (01Mar12) after his plane was forced to make an emergency landing due to an air leak.
The You're Beautiful hitmaker, who was en route to a concert for a group of military troops at Camp Bastion, boarded a carrier plane at the Royal Air Force Brize Norton in England on Wednesday (29Feb12) for the 12-hour flight to Afghanistan.
In a series of posts on Twitter.com, he writes, "I set off from Raf Brize Norton in a 40-year old Tristar with my keyboard player, Beardy, and 120 soldiers. Camp Bastion, here we come...! refueled in Cyprus and pushing on.... sunrise at 33,000 feet en route to the Middle Eastern desert. "
However, towards the end of Blunt's flight, the aircraft suffered a mechanical malfunction and was forced to land in Cyprus.
He adds, "Just had an announcement that the aircraft has got a problem. We're circling over Dubai (United Arab Emirates). I can see the world's tallest building below... We have an air leak. It's become very cold on the aircraft. Only 30mins short of Camp Bastion, but we're heading back to Cyprus. Not going to make it to Afghanistan tonight. Broken plane. Will try again tomorrow."