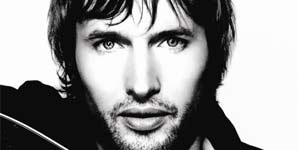 You sell a s**t load of records so what is the next step? How about get cracking on some new material or do a major tour then release some new material? Not if your James Blunt, instead you release a DVD/CD which is basically all the Back To Bedlam stuff just in a different way. In over words release near enough the same album but live. As amazing as I-Pods are Apple have a lot to answer for, because people want something different on their I-Pods and this is one of them. The thing that has surprised me the most about this whole package was the Parental Advisory on the front of the cover.

Now I know that James Blunt is a very successful artist, which has only been confirmed by his Brit Award nominations and successes. I am afraid to me with my tunnel vision he is just a tad depressing. Reviews that I have read have said that you need to hear him live to appreciate him. Well now I have that chance I get to listen and watch him.

Well the CD is James Blunt live in Ireland. Well I did listen to it from start to the end and yes I can see why people love him and think he is great. I am just not one of those people. Playing live I actually think he sounds more depressing if that is at all possible. The thing is in his interviews on the DVD and stuff it's like he is a totally different person who is always smiling (god I'm confused) Without divulging too much into that lets get on with what is actually on the CD. Well undoubtedly the single that made James Blunt the multi million platinum artist he is today had to be on there, 'Your Beautiful'. Naturally tracks such as 'High' and 'Goodbye My Lover', not forgetting his new single 'Wisemen'. All of these are also on the DVD live or as videos. There is a cover of Crowded House's 'Fall At Your Feet'. Interesting if you like James Blunt you will love it, if you like Crowded House then you will want to knee cap him.

The DVD is a different live session with a different setlist, so I suppose that there is a bit of variety. The DVD does have some decent extras with the makings of the (singles) videos and the actual video singles themselves. Also an interview with Mr Blunt and not to mention the photo gallery so all you ladies out there can spend a few hour looking at him.