There's no relation between the two Blakes.

London electronic artist James Blake launches a surprise new album today (May 6th 2016), entitled 'The Colour In Anything'. It's his third album venture and features a generous 17 tracks, including 'I Need A Forest Fire' featuring Bon Iver with whom he previously worked on 'Fall Creek Boys Choir'.

James Blake drops his third album 'The Colour In Anything'

Blake has released the new album on Polydor Records, with some epic new tracks such as 'Modern Soul' and 'Timeless'. As well as an appearance from Bon Iver, the record also has input from Frank Ocean and Rick Rubin - Ocean as co-writer and Rubin as co-producer. Perhaps the most fascinating thing about 'The Colour In Anything', however, is the album artwork which has been designed by noted illustrator Sir Quentin Blake, himself most famous for the imagery in the Roald Dahl books. It's a pencil and watercolour piece with dull colours, featuring a lone man stood in a field under some rainclouds.

Listen to 'I Need A Forest Fire' here:

Despite the shared surname, there is no relation between Quentin and James. The singer insisted that their wasn't even a distant connection on the Annie Mac BBC Radio 1 shows yesterday. 'I am so lucky to be able to work with him on this', he said on the show. 'I've always loved what he does.'

Blake's previous albums - 2011's self-titled debut and 2013's 'Overgrown' - reached the top 10 in the UK Album Chart and his most popular songs have been 'Limit to Your Love' from the former and 'Retrograde' from the latter. You'll have heard him again this year on Beyonce's single 'Forward', taken from her number one latest album 'Lemonade'. Blake has previously been recognised at the 2014 Grammy Awards as a Best New Artist nominee, and the same year's BRIT Awards in the British Male Solo Artist category. 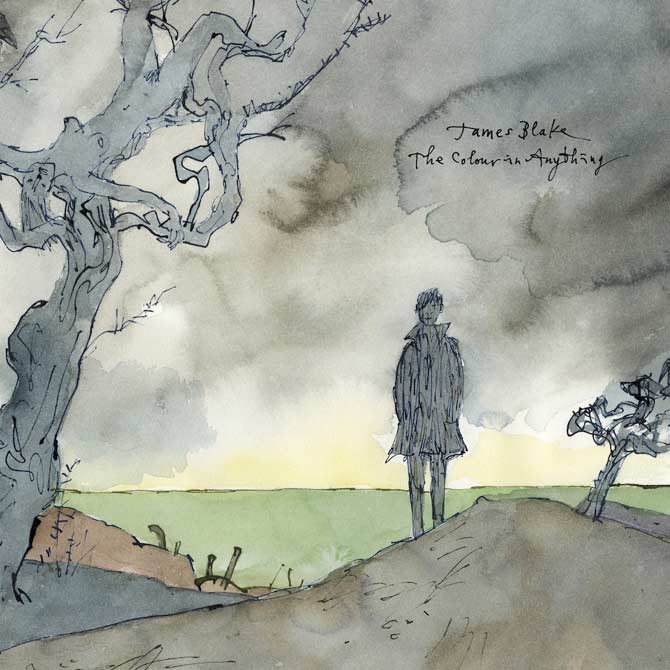 Quentin Blake designed the artwork for 'The Colour In Anything'