James Arthur Announces New Single 'Get Down' Out March 3rd 2014 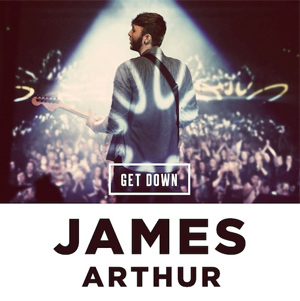 James Arthur Announces New Single 'Get Down' Out March 3rd 2014

Following a tumultuous and highly successful 2013 which saw his eponymously titled debut album storm the UK album charts and win huge international acclaim, James Arthur kicks off the new year with a bang with an extensive debut solo tour and the release of new single 'Get Down' - out on March 3rd through Syco Records.

Driven forward by atmospheric beats, euphoric strings and uplifting, heartfelt vocals, 'Get Down' is a life-affirming show-stopper underpinned by James' introspective lyrics which defiantly banish his demons and look optimistically forward.

Currently in the midst of a sold out headline tour which sees him perform 24 shows across the UK and Ireland, James will embark on his first ever European tour in February taking in 21 dates including two consecutive nights at Paris' La Cigale. Full tour dates and ticket details below.

Before Christmas James beat off stiff competition from Macklemore & Ryan Lewis, Alex Hepburn and Avicii to win Best New Artist at the prestigious NRJ Awards in France and also won Best Song at the influential 40PP Awards in Spain for 'Impossible', beating Robin Thicke, Daft Punk, Avicii and Bruno Mars. His acclaimed debut album, co-written and recorded with some of the world's hottest producers and stars including, Salaam Remi, Naughty Boy, TMS, Mojam, Da Internz and Emeli Sand', has gone Gold in the UK and has sold close to half a million records worldwide.