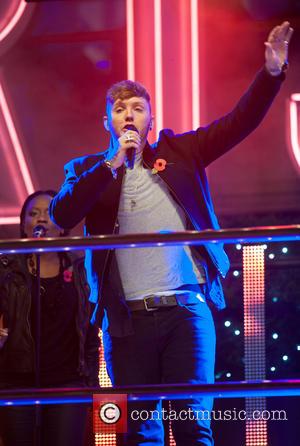 British singer James Arthur is facing a backlash from fans of The X Factor after thousands of people threw their support behind an online petition to have him banned from performing on the show after he used a gay slur.

The Impossible hitmaker, who won The X Factor last year (12), found himself at the centre of controversy after he branded a fellow musician a "f**king queer" during a rap and reportedly sent his former fellow contestant Lucy Spraggan, who is gay, a number of abusive texts when she challenged his use of the word.

Now a Facebook.com page entitled 'Drop Homophobe James Arthur from Xfactor' has called for him to be scrapped from performing on Sunday's (01Dec13) episode. Critics are also demanding a boycott of the show's sponsors Talk Talk and Domino's.

The page has received more than 10,000 'likes' and now Itv bosses have released a statement to insist they don't condone homophobic language but stand by Arthur's appearance.

A spokesperson says, "Both Itv and the producers of The X Factor would like to make it clear that in no way do we support, condone or share any form of homophobia or discrimination.

"Following his comments James has since apologised last week, making it clear that he did not mean to cause any offence and explaining the context behind his remarks."

A representative for Domino's adds, "Domino's Pizza would like to make it clear that in no way do we support, endorse or share any views which are in any way homophobic or discriminatory towards any group or individual. Domino's Pizza is proud to be a sponsor of The X Factor but we do not have any input into the editorial of the programme."