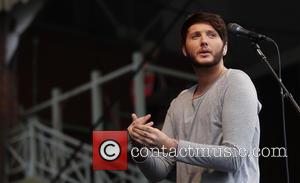 British singer James Arthur has confirmed reports suggesting he has parted ways with Simon Cowell and his record label Syco.

Rumours suggested Cowell and other executives at the company had dropped the U.K. X Factor winner after he wrote a song about terrorism, and now it seems the stories are true.

Arthur took to Twitter.com late on Tuesday to confirm he had moved on, writing, "Just to clear things up - I am no longer with Syco. I would like to thank all at the label for making a great record with me.

"I now have to move on and do something different - the future is bright!"

Arthur sparked controversy with the lyrics to his song Follow the Leader, in which he sang "I'm gonna blow up your family like I'm a terrorist", and then attempted to play down the fuss, insisting he was "not promoting terrorism".