New Jumanji movie on hold due to Covid-19

A new 'Jumanji' movie - starring Dwayne Johnson, Karen Gillan, Kevin Hart and Jack Black - has been put on hold due to the coronavirus, according to director Jake Kasdan. 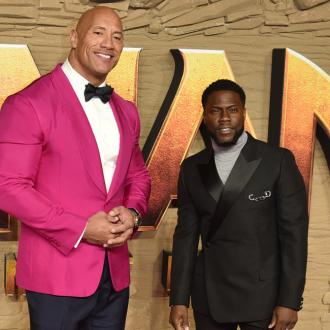 A new 'Jumanji' movie has been put on hold due to the Covid-19 pandemic.

Although filmmaker Jake Kasdan - who directed 'Jumanji: Welcome to the Jungle' and 'Jumanji: The Next Level, the follow-ups to the original 1995 movie - is keen to work on a third 'Jumanji' movie with stars Dwayne Johnson, Karen Gillan, Kevin Hart and Jack Black, he admitted that discussions have had to be shelved because of the global health crisis.

He told Collider: ''We're just starting to talk about all of that, and the truth is we've barely started. We were just getting into the conversation before this global calamity and we will re-engage it as soon as everybody's settled. We all love working together and we've loved making these.

''To me, the thing that's always been most critical when talking about a sequel, first in the first movie and now in the possibility of another sequel is, it would have to be exciting on its own two feet in a way that's comparable to what the first two were for me. I would have to love the idea just as much. So I think there will be a third one and it's just the earliest days of trying to figure out what that would be.''

Bebe Neuwirth, who played Nora Shepherd, the aunt of main characters Peter and Judy, in the original 'Jumanji' movie, made a brief appearance in 'The Next Level' and Jake was thrilled that she agreed to reprise her role at the end of the movie.

He said: ''Once we had that scene, it was kind of the first time that we felt like we had a really good ending. You know, like the right ending for the story.

''And then with the additional thought that Bebe could do it and play the same character and we could have this really nice, organic connection to the original movie, which is the way that I like that to work... it's not forced in some pandering way

''When Bebe agreed to come do it, then it got to be truly exciting. It gets this whole other dimension because having her there in the first place, was just exciting. And then, she's just so good. She's just this wonderful actress. So she walks in, she's in the movie for a minute and a half and what she does I think is just so fun. And gets a huge laugh. You see her flesh in a way that's unbelievably hard to act and she's wonderful, you know?''

New Jumanji movie on hold due to Covid-19