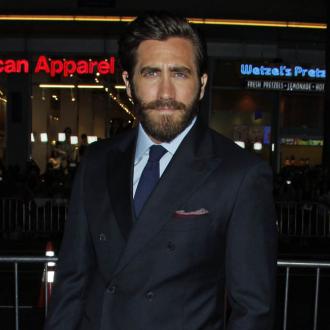 Jake Gyllenhaal has poked fun at Amy Schumer for eating his birthday cake.

The 'Trainwreck' star recently admitted she came across the 34-year-old actor's sugary treat in the freezer when she was renting his home and ate it while drunk, imagining she was at a party and Jake was her boyfriend.

And now Jake has responded and pretended to eat a cake belonging to Amy.

Served a huge piece of cake which had 'Happy Birthday Princess' written on it by talk show host Stephen Colbert, Jake was asked if he had a message for the comic.

Taking a bite out of the dessert, he said: ''Hey, princess, What's going on?''

Amy appeared on the same show last week when she made her cake confession.

She said: ''He left a frozen cake in his freezer. It was very old, it was not edible ... I would get drunk, and I would eat it, and I would talk as if he was there and I was at the party the cake was served at.''

The comedienne went on to show home footage of herself biting into the sizeable cake while saying: ''It says 'happy birthday' ... because it was your birthday. You're a supermodel and you're dating Jake Gyllenhaal.''

The blonde beauty also admitted to rummaging through Jake's personal possessions, but he didn't address it.

She said: ''I went through all of Jake's stuff, of course I did. Everything!''