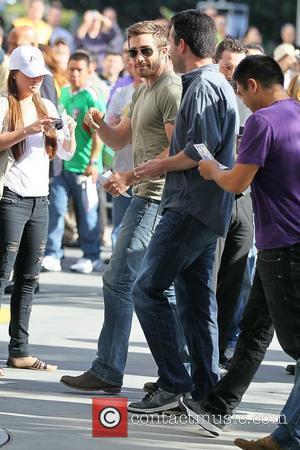 Jake Gyllenhaal had no problem getting intimate with Anne Hathaway for his new film LOVE AND OTHER DRUGS - because they had already developed their onscreen chemistry while shooting Brokeback Mountain.
The pair, who played husband and wife in the Oscar-winning 2005 movie, reunited for the upcoming film about a Viagra salesman and often had to strip off for sexy scenes.
Hathaway recently admitted crying "every single day" she had to disrobe in character - but Gyllenhaal admits playing the star's secretly gay partner in the cowboy movie left him at ease during filming.
He tells Britain's Esquire magazine, "Anne and I had already had sex on film (in Brokeback Mountain). There's something about the way Annie and I both work which is inherently very musical. It's all about rhythm. There's a rhythm to writing, there's a rhythm to sports, there's a rhythm to sex."
And Gyllenhaal admits his fans could be in for a shock when they buy the DVD - as many of his nude scenes failed to make the final edit: "I was naked a lot in the movie. I was naked in more of it than was even in the final cut. A director's cut? I don't even know how that would be rated."