Demolition Was A New Challenge For Jake Gyllenhaal

In his new drama Demolition, Jake Gyllenhaal plays a remarkably unlikeable, apathetic guy who decides to dismantle his life physically and figuratively after his wife dies in a car crash.

Jake Gyllenhaal looked forward to working with costar Naomi Watts and director Jean-Marc Vallee (Dallas Buyers Club), mainly because the filmmaker is notable for encouraging his cast members to improvise. But Gyllenaal says he was taken aback when Vallee told him not to prepare for the role. "Weeks before, I was like, 'When are we going to rehearse it?'" Gyllenhaal says. "And he was like, 'No, we can talk about it on set.' He really pushed me out of my comfort zone, this technique and this style that I've developed over a long period of time. I showed up pretty scared the first day, because I hadn't done any preparation. But it wasn't manipulation, because he was always with me." 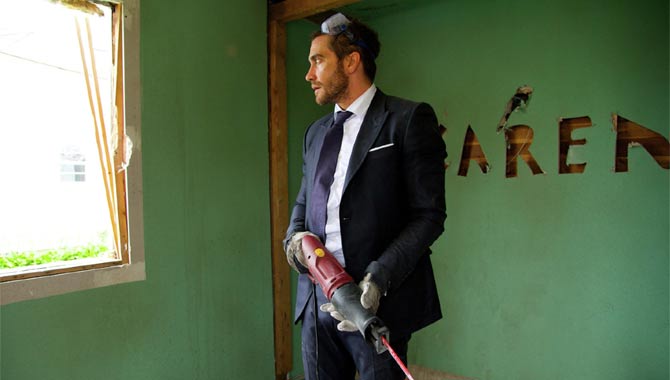 And Gyllenhaal really enjoyed Vallee's stripped-back stye of filmmaking. "I had heard and read about his process," he says, "and how he films his movies and how he treats his actors and just his whole way of circumventing the Hollywood vanity style of filmmaking. I loved it! When I got to set, there was no makeup, there was no lighting. It's just that instinct."

And he feels that working in this way added to the story they were telling. "It's interesting because it's a movie about defying convention," Gyllenhaal says. "People say, 'I don't like this guy. He seems like he has everything. Why would he be destroying a house that's so pretty?' But he's the kind of guy that I don't think you need to like all the time. I think it's okay not to necessarily like a character, particularly your main character, or to understand a character."

Gyllenhaal is aware that this kind of complexity is hard for his fans to accept, but he vows to continue challenging himself as an actor. "People say to me a lot, 'Why don't you just go do a romantic comedy? Do a fun movie,'" he laughs. "I'm down with having fun, but with regard to what people consider to be a 'movie star', I think the actors that I have respected for many years have cultivated a craft. They're the people who are true to who they actually are. That's what I try and do as much as I can. I often fail at it, but I just keep trying."

Watch the trailer for Demolition: