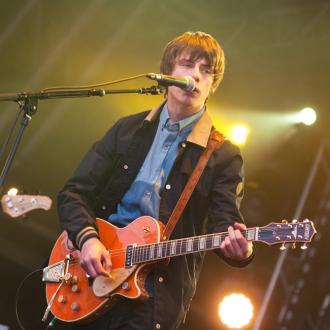 The 'Lightning Bolt' singer, who performed at Glastonbury in South East England last weekend, admits he's not a fan of traipsing through muddy fields but insists it was a privilege to play the event.

Speaking before his show, he said: ''I hate festivals so much, but obviously to be this high up on the line-up and to be playing here tonight, is a privilege. But the actual experience of festivals I could really do without.''

This year marked Jake's year at Glastonbury at Worthy Farm in Somerset and he admits he's been overwhelmed in the past.

He said: ''I remember going out onto the Pyramid Stage last year and seeing so many blurred faces. It was much bigger than I thought it was going to be, I couldn't really believe it to be honest.

The singer was playing a later slot this year and claims playing the Pyramid Stage was very different to being on the BBC Introducing Stage a few years ago.

He told NME magazine: ''It's just opposite ends of the spectrum. There was hardly anybody there first time, so to then go onto the Pyramid and see that many people, it kind of shows that for me - and for anybody else - dreams can come true.''