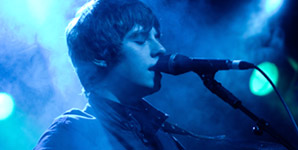 With his music already being used for a major national ad campaign, appearances at Glastonbury and a number of other festivals both at home and abroad, an appearance on Later. and a full headlining tour to look forward to before the year is over, Jake Bugg has achieve more this year than most artists manage in a full career.

Still yet to reach 20-years of age, Nottingham-born Bugg looks to have the world at his feet already with it looking as though things can surely only be on the up for the young singer/songwriter.

Before he explodes into superstardom, we managed to have a chat with him about influences, writing and his upcoming, debut album.

Where do you get most of the ideas behind your songs?
Just everyday things. Sometimes I like to fantasize or make a story but sometimes I just talk about what's happening right now in the world or what's happening in, for example I'll write something about my town, about where I'm from and my estate and stuff. stuff like that, really.

Are you from quite a musical background, or did you just end up getting involved in it by your own accord?
Yeah, I had a few cousins and uncles that played, my mum and dad used to play. On both sides so yeah, they played instruments and sing and stuff. I had no interest in music until I was about twelve, really; I was just into football; and as soon as I picked the guitar up I just left the football behind and started singing.

When did you start listening to Donovan, Bob Dylan and Jimi Hendrix? Have you always being surrounded by these artists?
Well, when I first heard Jimi Hendrix I thought he was brilliant and Donovan, these came around the time I put down the football. But people like Johnny Cash and Dylan, the first time I heard them I didn't really thing anything of them at first and that's just something that's grown on me. The Beatles are probably my favourite band in my eyes; I always liked those even when I didn't have an interest in music.

How did growing up in Nottingham develop your musical tastes? Did it make you more inclined to go on to become a musician?
It's a funny one, I mean, Nottingham's like most towns really; it has its good bits and bad bits. A lot of the people I hanged with don't really listen to the music that I necessarily like but, yeah, I would say it would've had an impact for some songs like 'Trouble Town' and 'Lightning Bolt'; they're about, not so much my estate like some people assume, there's plenty of other council estates and places just like it and people wanting to get out as well.

I've heard that you're a fan of Wiz Khalifa, are you into your hip-hop?
I'm into all sorts and they sound good bang on but some of the dance stuff today, it all sounds the same and it's the same beat and there's always some crappy drop somewhere but if there's a dance tune or hip hop tune that's got a great tune to it and the lyrics are good then bang on.

Are you in to any other types of music that might surprise some people?
A bit of everything, really. The old blues stuff from Charlie Patton and Robert Johnson, even a bit of Beethoven, a bit of Mozart is brilliant. It's all good. From that to the Oasis or The Arctic Monkeys, whatever sounds good, man.

Now that you have a recording contract, are you worried at all about how illegal download etc. might affect you in the future?
Yeah, when you're younger you find a lot of music through YouTube and stuff which is a great way but at the same time, as a musician, you do wanna be able to live comfortably from making music. It's all good having a recording contract and stuff but I think a lot of the money and stuff comes from live shows and touring and stuff more. It's great that I've been given the opportunity to make records and that's what I wanted to do 'cause I can get my music out there, that's what I'm doing this for.

You have a busy summer ahead on the festival circuit, considering the exposure you received at Glastonbury 2011; do festivals feel like a natural stomping ground for you?
I like playing festivals, they're great! Like T in the Park, I played that the other week; that was brilliant. I'm not a big fan of the mud, to be honest, but with that aside, I think festivals are brilliant; the people are just there to have a good time and they're there to see you walking through the mud to go and play for them. The people just like to have a great time that's all and it's a great vibe, I love playing it.

You'll be doing a sweep of the country in the autumn; will this be your first headlining tour?
I've done a couple of little ones but, yeah, this is my first proper big one.

Excited?
Yeah, definitely excited, I can't wait! I'm still trying to take in the fact that I managed to sell out Koko in London and Manchester, it's a bit of a shock for me, I never thought I'd get this far. It's great!

Do you still get nervous before you go on stage or have you just about got used to performing in front of people?
Sometimes, yeah. Sometimes the nerves can get to you or you can get a bit anxious if it's not really your crowd but once I'm on there I seem to be alright and I'm a bit more at home and the nerves seem to go away.

Do you remember the first time you took to the stage?
Well, funnily enough, my first ever gig on a proper stage was probably at secondary school which is one of the scariest gigs you can do; all the rest of the school, the same people you're gonna see for the next three of four years. That was great and everyone was supportive, no-one ever said a bad word luckily enough for me, no-one ever put me down so, yeah, I thought if I could do that I could do nearly anything.

A lot of musical press bring up your age; do you find it at all irritating when people dwell on this?
Not really, no, it's cool. Some reviews are like, I tend not to read them so much but a couple I've seen are like, 'The music's good AND he's eighteen' it's not like, 'He's eighteen and he's making this music'. I don't think age should matter too much, it's about songs at the end of the day but it don't really bother me that much, to be honest.

Do you think you'd have this buzz if you were older?
I don't know, I mean, that's a tough question. I can't really say. I think it helps to be younger because you've got a bit more time and a bit more time to develop yourself, as well, as a songwriter. I think I wouldn't be doing as well if I was 28, saying that.

The album comes out in October, are you still in the studio working on it?
I believe it's more or less finished now, it's just getting mixed and stuff and getting all put together. I can't really wait to see it in the shops or even have it in my hands for that matter, I'm really excited and I'm glad it's gone well.

Any surprises or guest spots on the album?
No, there'll be no collaborations; just my songs, really, because it's a debut album. Maybe on the next album, that'd be cool. Not so much the first one.