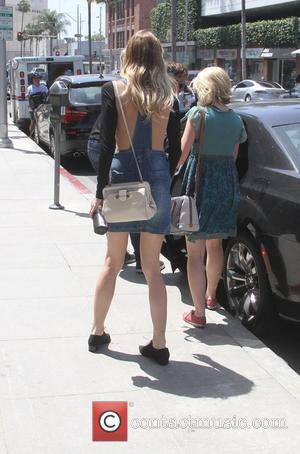 Picture: Jaime King and Joey King - Pregnant Jaime King showing off her baby bump in a denim overall-style mini-dress out and about with with Joey...

The former Hart of Dixie star and her director husband Kyle Newman welcomed their second child, Leo Thames, last week (16Jul15), and the pop star, who was appointed the little one's godmother earlier this year (15), came face-to-face with the newborn on Tuesday.

Swift took to Instagram.com to post a close-up shot of Leo's tiny hand gripping her finger, and her caption included lyrics to her song Never Grow Up.

It read: "Your little hand's wrapped around my finger and it's so quiet in the world tonight..."

The Love Story singer posted another photo of her holding little Leo in her arms as new mum King looks on, writing the caption "Meeting my boy".

King and Newman are already parents to two-year-old son James Knight, whose godparents are actors Jessica Alba and Topher Grace.