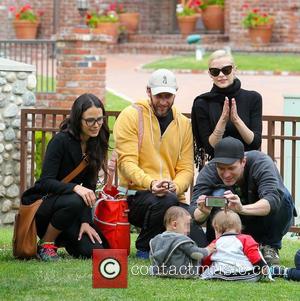 Actress Jaime King was overjoyed to learn pal Rachel Bilson was pregnant because her Hart Of Dixie co-star wanted a child "so badly".

The former The O.C. star and actor boyfriend Hayden Christensen hit headlines last week (21May14) amid reports suggesting they are expecting their first child later this year (14), and King couldn't be happier for Bilson.

King tells UsMagazine.com, "I was freaking out! I knew she wanted a baby, she wanted it so badly... She's in a really good space. I'm really thrilled for her."

Bilson's baby news emerged days after the 32 year old confessed she wanted to become a mother sooner rather than later.

In her new Health magazine interview, she said, "To start a family would be good, any year in the next few years. I've always wanted to be a mum. I have always wanted kids. I can just see this little toddler waddling around the house."

Bilson and Christensen have yet to officially comment on the pregnancy reports, but the parents-to-be have been photographed on vacation in Barbados, where the actress displayed a growing baby bump in a strapless bikini.