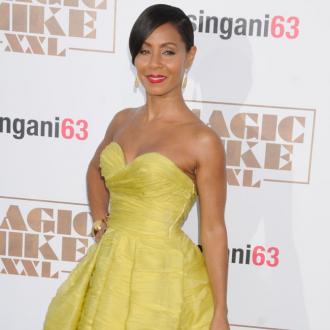 The 43-year-old actress - who plays the strip-club owner alongside Channing Tatum in the movie sequel - has claimed that although the film may intimidate some men, her husband Will isn't going to be among them.

She shared: ''Oh he'll see it for sure, definitely! Will loves entertainment. It depends on what kind of guy you are and why you see the films.

''It could be [intimidating] for some men but I really think we're making a movie for the ladies. My husband? Let me tell you something. I don't know if you've seen him lately, or seen 'Focus', but he's looking dammed good these days. He has absolutely nothing to worry about!''

Meanwhile, Jada also argued that strip-clubs are an empowering environment for women.

She told Metro newspaper: ''It's true and unfortunate. One reason I did this movie was to explore that. These days I can't actually go into a strip club, I mean, I guess I could but I don't want those headlines. Wearing a wig and a hat would never work!

''There is something quite celebratory about stripping. One of the reasons why we have stripper pole exercise classes is because women love to have the opportunity to showcase their physical beauty. Why women go to male strip clubs - I see now after doing this movie - is we're not going to buy sex.

''It's actually having a good time going and feeling wanted and desired. You see beautiful men on stage and they're there for you!''