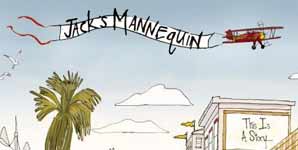 He's the ethereal voice, songwriting powerhouse and full-contact keyboardist behind Something Corporate, the piano-rock quintet praised by one critic for its "combination of intelligent lyrics, infectious melodies and killer piano."

Now Andrew McMahon is taking something of a spring break from the band, which he's practically lived for the last four years in order to offer up an angst-flavored side project.

Jack's Mannequin comes Every Thing Transit, a highly personal theme album by McMahon and collaborators, due for an August 9th release on Maverick Records.

Before the release of Every Thing Transit, you have been invited to take a sneak-peek from the full-length on this three-song sampler that includes "Holiday From Real," "Miss Delaney" and the first single off the album "Mixed Tape."

"The Mixed Tape" video, which stars a recuperated Andrew Mc Mahon and Peyton (Hilarie Burton) from One Tree Hill as "the love Interest".