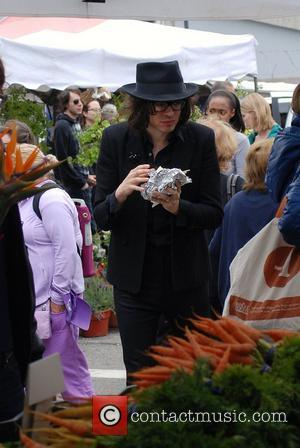 Jack White is due to release his debut solo album, according to The Guardian, today (January 31, 2012). Blunderbuss scheduled for release on April 24, 2012. The White Stripes, DEAD WEATHER and The Raconteurs star told Radio 1's Zane Lowe that the album happened by accident and wasn't something that he had previously planned to record: "A few months ago, we had a session booked and someone didn't show up," he told the DJ, "so I said, 'I guess we'll do some of my songs' . It kick-started the whole process."
As a prelude to its official release on February 7, the debut single, 'Love Interruption' was released online yesterday. The Guardian's Sean Michaels describes the track as "a plaintive number with clarinet, female backing vocals, and not a single electric guitar." Jack White has become known for his musical collaborations and the album will apparently include contributions from Ruby Amafu, Seasick Steve and Chris Thile of Nickel Creek.
Blunderbuss will be released on his own label, Third Man, in collaboration with Columbia Records. The label already releases music by his bands The Dead Weather and The Raconteurs, as well as Wanda Jackson, Whirlwind Heat and Laura Marling. White has said of the album "These songs were written from scratch, had nothing to do with anyone or anything else but my own expression, my own colours on my own canvas."