Revered Scottish Artist Jack Vettriano Has Put Down His Paintbrush For "The Foreseeable Future" After Suffering A Dislocated Shoulder In A Recent Accident. 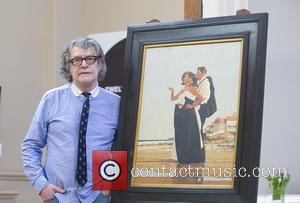 Picture: Jack Vettriano - Jack Vettriano launches the up and coming sale of a private collection of his paintings. It's estimated that a total of £800,000...

The 61 year old, whose most famous work is The Singing Butler, did not share any details about how he injured himself, but admitted he is facing an uphill battle to regain full health.

A statement released on Friday (29May15) reads, "As a result of a recent accident my right shoulder was dislocated and the reality is that I am going to be unable to paint in the foreseeable future.

"I am undertaking a course of physiotherapy but am facing a long recovery period. In the meantime I would like to thank the public for their continued support and interest."