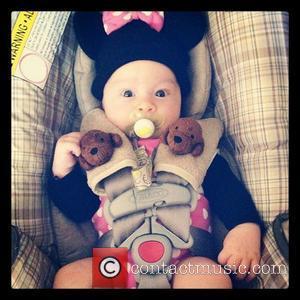 Picture: Jack Osbourne posted this image of his daughter Pearl Osbourne to Twitter with the caption 'We couldn't resist the mini mouse hat' USA - 09.07.12...

Reality TV star Jack Osbourne credits his new daughter with helping him deal with his multiple sclerosis diagnosis.
The 26 year old and his fiancee Lisa Stelly welcomed baby Pearl to their family in April (12) and Osbourne has concentrated on his duties as a parent rather than dwelling on his condition after a diagnosis in May (12).
He tells Access Hollywood, "When you get news like MS, it’s a bit of a buzzkill. But having a baby is forcing me to focus on just that and my work, so it takes the sting away a little bit."
The son of rocker Ozzy Osbourne also reveals his mood is lifted as he sees how quickly his baby girl is growing.
He says, "She recently rolled over for the first time. We’re excited about it because she’s so advanced. Most kids don’t do it until 14 weeks. Expect big things."