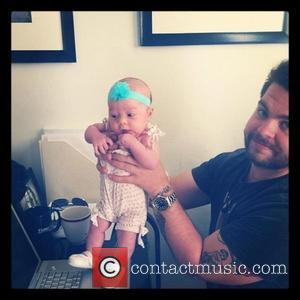 Picture: Jack Osbourne posted this image on Twitter with the caption 'Bring your baby to work day '

Jack Osbourne has been fired from a U.S. television show, after it emerged that he had multiple sclerosis - the incurable disease that affects the nervous system. Osbourne, 26, said he was "offended" after bosses at a particular television show fired him by email.
Speaking on his mother's daytime show 'The Talk', Jack angrily explained, "I had booked a job, right when I got diagnosed, and the company didn't think I could actually perform the job.Out of everything, that's what has really ticked me off the most because it's like, 'Don't tell me what I can and cannot do'. At no point did they call me. It was all through agents and lawyers - I was offended by it". Mother Sharon sarcastically added "It was a really nice email". Though Jack didn't name the programme, the UK's Sun newspaper has revealed it was 'Stars Earn Stripes' on NBC, which sees soldiers putting celebrities through rigorous military exercises. A source on the show admitted that they didn't think Jack was up to the physical challenges, but doubted that he had been fired by email. The series features Muhammad Ali's daughter Laila and 'Superman' star Dean Cain - it screens in the US in August.
The timing of Osbourne's diagnosis couldn't be worse, given that he's just become a father for the first time. Nevertheless, the reality star has vowed to fight on, and "adapt and overcome" the disease.