Jack Osbourne Announces Baby Is On The Way

Jack Osbourne has revealed his fiancee Lisa Stelly is expecting their first child and he is ''excited and nervous'' at the prospect of becoming a father. 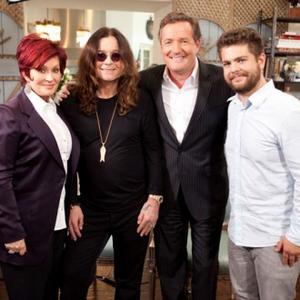 Jack Osbourne is to become a father for the first time.

The 'Adrenalin Junkie' star has confirmed fiancee Lisa Stelly - who he got engaged to two weeks ago - is expecting their first child and he can't wait to be a dad.

During an appearance on CNN's 'Piers Morgan Tonight' with his parents Ozzy and Sharon Osbourne, he revealed: "My life is absolutely insane right now. I guess technically I do have something to tell you. I'm about to be a father. I'm excited. I'm a little nervous, but I'm excited. It's going to be fun."

Jack shot to fame on family reality TV show 'The Osbournes' but the 25-year-old star has vowed not to put his own Offspring through the same experience.

He said: "I'm not going to do a reality show, though!"

Ozzy and Sharon are equally as thrilled by the news, though The Heavy metal legend admits he is still in "shock".

He joked: "I'm in shock. It's fantastic. It doesn't matter what I think - the baby's on its way."

Sharon added: "I'm happy because it's what Jack wants. And so I'm happy and I've always wanted to be a grandma."

Meanwhile, Jack's sister Kelly proclaimed herself to be the "luckiest girl in the world" about the news.

She wrote on her twitter page: "girls night in w/ @lisamarstelly my future sister in law & mother of my niece/nephew we are so happy the news is out so i can talk about it

"been waiting 2 say this for so long im the happiest girl in the world im going to be an auntie! @lisamarstelly welcome 2 the family i