Jack O'Connell turns in a stellar performance in 'Unbroken'.

We'd all but discounted Angelina Jolie's Unbroken from the Oscars race after a set of middling reviews but if there's one thing the Academy likes it's a successful box-office biopic and Jolie's tale of triumph under adversity pulled in $850,000 in Christmas Eve showings at just 1,979 venues. 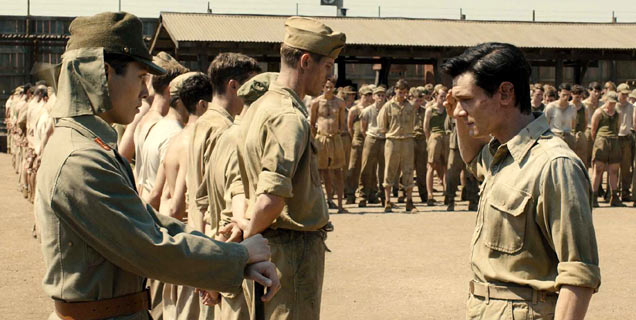 Universal then expanded the movie to 3,131 locations on Christmas Day given the huge competition of The Hobbit: The Battle of the Five Armies and Annie.

Unbroken, featuring a stellar lead performance from Jack O'Connell, tells the story of the life of Olympian and war hero Louis Zamperini, who survived on a raft for 47 days after his bomber was shot down in World War II. Zamperini - who died this July aged 97 - was sent to a series of gruelling prisoner-of-war camps.  Universal said that it expected Unbroken to take a stoic $17 million to $19 million from the 4 day Christmas period.

More: Miyavi plays a sadistic prison guard in Unbroken - but who is the musician?

The movie also faced competition from Disney's critically acclaimed Into the Woods, just opened at 2,440 sites and Mark Wahlberg's remake of the James Caan movie, The Gambler, which opened at 2,478. The Weinstein Company's Big Eyes, which could provide Oscar nominations for Tim Burton and lead actress Amy Adams, opened at over 300 independent venues.

Of those movies, Into the Woods is the most likely to finish second to The Hobbit: Battle of the Five Armies and is tracking in the $26-29 million range for its four day run. The movie has the benefit of eye catching talent including Johnny Depp, Meryl Streep and Anna Kendrick.

But it is Five Armies that will soar this Christmas. It took $6 million at 3,875 locations on Christmas Eve to lift its total to $114 million. That's a dramatic increase of 8% above last year's takings for The Hobbit: The Desolation of Smaug though 7% behind The Hobbit: An Unexpected Journey.

More: What are the critics saying about Unbroken?