Jack Nicholson, Bruce Willis And Harry Styles Were Among The Stars Who Checked Out The Rolling Stones At An Intimate Gig In Hollywood On Wednesday Night (20may15). 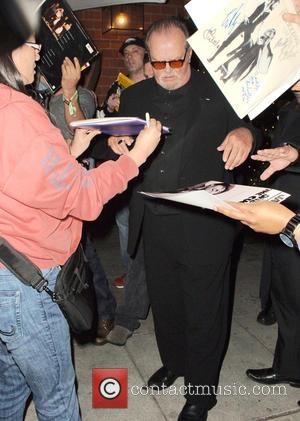 Picture: American Hollywood star Jack Nicholson was spotted out as he visited the Mr Chow restaurant for a birthday meal in Los Angeles, California, United States...

The supergroup announced the 'secret' gig on Wednesday morning, but the venue wasn't revealed until tickets went on sale at noon local time.

Fans flocked to The Fonda Theatre to hear Mick Jagger and his bandmates perform their hit album Sticky Fingers in its entirety. The album will be re-issued on 9 June (15) with added extras.

The gig also served as a warm-up for the band's upcoming North American Zip Code tour, which begins at Petco Park in San Diego, California on Sunday (24May15).

As well as the aforementioned Nicholson, Willis and Styles, Kesha, Andy Garcia, Joe Pesci, Leonard Cohen, Eric Idle, Steven Van Zandt and Jagger's model daughter Georgia May were also spotted in the audience, who found themselves star spotting when a cheeky Jagger joked, "We're at the Fonda, and of course we've got Jane Fonda... and her father, Henry. And Miley Cyrus, and Clark Gable. Taylor Swift's here with Dean Martin. Thank you, Dean; love your work."

Dead stars Henry Fonda, Gable and Martin may well have been there in spirit, but no one caught sight of Miley or Jane Fonda, and Swift was headlining the first gig of her latest U.S. tour in Bossier City, Louisiana.

As well as the 10 songs from Sticky Fingers, the Stones opened with Start Me Up, closed the gig with a cover of Otis Redding's I Can't Turn You Loose and also performed a tribute to late bluesman B.B. King as they tackled his song Rock Me Baby.

The low-key gig was a freebie for fans who paid $10 (£6.70) for tickets - they were given their money back upon entry to the venue.