Review of To The Sea Album by Jack Johnson

Hawaiian, film maker, surfer. And a musician creating material to reflect this. You can't mistake the sound of Jack Johnson for anybody else, the fact that it epitomises the feeling of long summer days and chilled out evenings, makes him a pleasure to listen to. 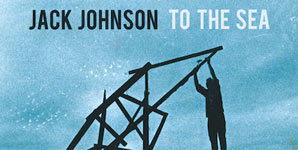 To The Sea is the sixth studio album from Jack Johnson. Whilst his music style and creations have never been anything to shock or break his mould, this album is perhaps more 'rocky' than previous ones. There's a predominant sway towards guitar riffs, full band work, and just having a jam in a chilled out way.

Tracks such as 'Red Wine, Mistakes, Mythology', and 'At Me Or With Me' were a pleasant surprise. It's also not hard to see why 'You and Your Heart' was chosen as the first single release from this album.

Like stories for children, the narratives of tracks give you snippets of things he has learnt along the way. Offering a sense of escapism from the bad news of the word around you, what can be so bad about that?

The pure joy and pleasure he gets from writing and performing is evident from the start. A guy who appears to be doing what makes him happy, rather than being driven by money. Yes, a tour of this album will make a decent profit, but it's all going to charities to help the environment! What a nice guy. This album is about relaxing and just enjoying yourself - You won't be disappointed.