Funnyman Jack Black Was Hesitant To Sign On For A Red Nose Day Charity Mission To Uganda, Because He Wasn't Convinced He Was The Right Person For The Job. 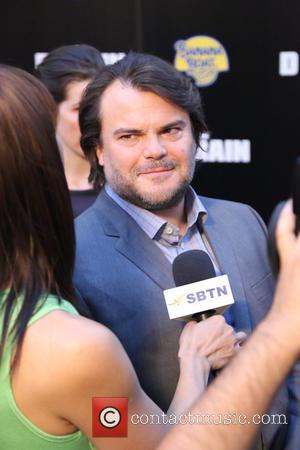 Picture: Jack Black - A variety of celebrities were snapped as they arrived for the Los Angeles Premiere of 'The D Train' which was held at...

The King Kong star was recruited by officials to take part in the U.S. launch of the annual British charity telethon, and they wanted to send him to the slums of Kampala to film a piece about poverty for the live event next week (begs18May15).

Black admits he was unsure he would do the short documentary justice because he had never taken part in such a serious mission, unlike well-known actors and humanitarians like Sean Penn.

He tells U.S. breakfast show Today, "(I thought), 'I don't know if I'm the right guy to do that, it's not really my thing.' I just don't think of myself in those kind of situations, where things are dire. Sean Penn comes to mind!"

Organisers managed to convince Black he was the right guy and he recently flew out to Uganda, where he witnessed first-hand the extreme poverty suffered by thousands of citizens in the city.

Upon landing in Africa, Black made a vow on camera, stating: "I'm not going to cry, it's not going to be that situation."

However, he struggled to stick to his goal after becoming particularly moved by the story of 12-year-old orphan Felix, who slept on the streets and spent hours every day scouring the city for glass and metal to sell so he could buy food.

Black bonded with the child by engaging in a beatboxing jam session, but he couldn't help but think of his own kids as he learned about Felix's daily struggle.

In the film footage, the actor says, "No doubt (I was thinking about my children), because you look at him and you go, 'My boy is that kid's age' and it's just the horror of imagining them alone, in a scenario like that. It really drives it home."

Black admits he is "not a cryer", but he found himself overcome with emotion during the trip: "I failed in my promise (not to cry). I got very emotional and I was surprised at how it affected me."

He adds, "I learned (from the trip) that I'm not a total robot. I do still have some robotic tendencies, but there is some feeling in that strange, cavernous comedian's robot heart."

Black's charity mission has already brought about some change - Felix has since been receiving help through a programme sponsored by the Red Nose Day appeal.

His documentary piece will air as part of the Red Nose Day U.S. telethon on 21 May (15), when stars including John Legend, Sean 'Diddy' Combs, Adam Levine, Blake Shelton, Christina Aguilera, Will Ferrell and Coldplay will also make appearances.