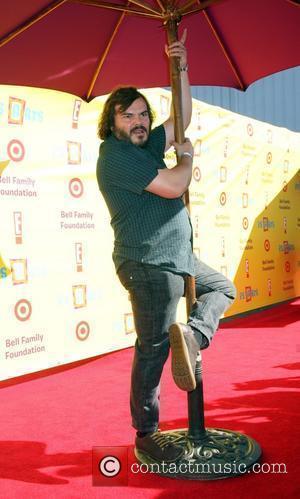 Jack Black has marked the one-week anniversary of RONNIE JAMES DIO's death by paying tribute to his rock idol.
The funnyman reveals Dio was among the inspirations behind his rock act Tenacious D, and he once teamed up with the former Black Sabbath and Rainbow star on film, in the video for Dio's Push.
In a statement written for Time magazine, Black reveals, "Dio has always been my favorite heavy-metal vocalist. Not just for his musical chops but also for the passion he poured into every performance. His use of beautifully haunting melodies leading to volcanic eruptions of raw rock power led to some of the great anthems of the genre.
"When Dio... performed live, he would stalk the stage like a dragon slayer. His commitment and theatricality were spellbinding. As a teenager I was profoundly moved by the life-affirming fire of his songs. They were filled with glory. They made me want to climb mountains and battle demons.
"To listen to Dio is to be transported to an ancient time of mystery and joy. His songs were an escape for millions of kids looking for release from the usual bull found on the FM dial.
"I had a chance to work with him, and he was about as cool a person as you could hope to meet. He was generous and soft-spoken, humble and serene, and had a tremendous sense of humor... Thank you, Dio."
The rocker lost his battle with stomach cancer on 16 May (10). He was 67.