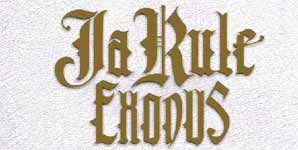 (Nov. 29, 2005 – New York, NY) Straight outta Hollis, multi-platinum The Inc./Def Jam recording artist and certified box office sensation Ja Rule has been at the epicenter of hardcore hip-hop's entry into the mainstream over the last half-dozen tumultuous years. Ja Rule's long-distance run is collected for the first time in his career on his 7th album, EXODUS, a newly-compiled 19-track anthology spanning 1999-2005, scheduled for December 6th release.
The title tunes "Exodus (Intro)" and "Exodus (Outro)" – new, previously unreleased tracks (co-written by Ja Rule and produced by Seven Aurelius for 7th Sign & Irv Gotti for Top Dawg Productions, Inc.) – open and close the album. EXODUS includes a third previously unreleased track, "Me" (co-written by Ja Rule and produced by Arizona Slim and Irv Gotti for Top Dawg Productions, Inc.).
At the heart of EXODUS are the hit singles and tracks covering every year of Ja Rule's success – starting with "Holla Holla," his first breakthrough #2 Rap single of 1999, and "Put It on Me" (feat. Vita), his first #1 entry on the Rhythmic Top 40 chart the following year. Over the next four years, Ja Rule amassed an astounding track record of collaborations with the biggest names in pop, R&B and hip-hop as he rode the top of the charts with (among others) "I Cry" (featÂ¬urÂ¬ing Lil' Mo), "Livin' it Up" (featÂ¬urÂ¬ing Case), "Always On Time" (featÂ¬urÂ¬ing Ashanti), "Thug Lovin'" (featÂ¬urÂ¬ing Bobby Brown), "Mesmerize" (featÂ¬urÂ¬ing Ashanti), "New York" (featÂ¬urÂ¬ing Fat Joe & Jadakiss), and "Wonderful" (featÂ¬urÂ¬ing R. Kelly & Ashanti). Other guests include DMX & Jay-Z (on "It's Murda"); J-Lo & Caddillac Tah (on "Ain't It Funny"); and Ron Isley aka Mr. Biggs (on "Daddy's Little Baby")
With U.S. sales of his first six albums – Venni, Vetti, Vecci (1999), Rule 3:36 (2000), Pain Is Love (2001), The Last Temptation (2002), Blood in My Eye (2003), and R.U.L.E. (2004) – in excess of 10 million units, and worldwide sales topping the 13 million mark, Ja Rule has established his imprint in the hip-hop, pop and R&B hierarchy. Adding to his roles as recordÂ¬ing artist, businessman (founder of The Inc, FocusVision film company, and the Mojito liquor company launching next year), fashion designer (his Erving Geoffrey premium Urban wear line), philanthropist and political activist (his L.I.F.E. Foundation programs) – Ja Rule has also established a successful career in film.

His screen credits began in 2000 with Robert Adetuyi's Turn It Up, and include such hits as Rob Cohen's blockbuster The Fast and The Furious in 2001, Don Michael Paul's Half Past Dead with Steven Segal in 2002, David Zucker's smash Scary Movie 3 with the Wayans brothers in 2003, and the back-to-back hits in 2004, The Cookout (with Queen Latifah) and Shall We Dance (with Richard Gere). Ja Rule's 10th movie, Assault On Precinct 13, which opened January 2005, starred Ethan Hawke, Laurence Fishburne, John Leguizamo, Maria Bello, Drea de Matteo, and Gabriel Byrne.