Izabo's new single, 'Summer Shade' is taken from their new EP of the same name, which is available to download for free on their official Facebook page.

The video for 'Summer Shade' perfectly complements the summery, bouncy tune. Directed by Shushu E. Spanier, the video shows an ice cream man playing the guitar while making ice cream. This causes the ice cream to grow moustaches and start singing, much to the horror and disgust of the children who buy them.

Izabo are an Israeli based band who formed in 1989. While there were originally seven members in the beginning, the line up now has four of the original musicians left: Ran Shem-Tov (vocals and guitar); Shiri Hadar (keyboards); Jonathan Levy (bass) and Nir Mantzur (drums). While the latter three are experienced session musicians in the Israeli music scene, Ran Shem-Tov is an accomplished producer, having worked with Israeli singers Yehudit Ravitz and Anat Damon. Izabo's debut EP, 'Fun Makers', was released towards the end of 2003 to positive reviews. The band has also toured throughout England, Scotland and the Netherlands. 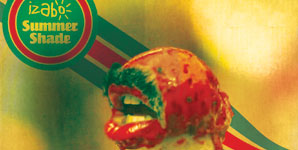