Quote: "I'm so much less anxious because I have a sense of what's to come. I think the uncertainty last time is what made me nervous... I think I'm carrying a little athlete because the kicks are sharp. It's either muscle memory or the baby's going to be very strong." Reality star Ivanka Trump opens up about her second pregnancy.

Tweet: "Jared and I are so excited that Arabella will become a big sister this fall. Thanks for all your good wishes!" Donald Trump's reality Tv star daughter Ivanka Trump has confirmed reports she's expecting a second child with her husband Jared Kushner.

Tweet: "Transferring from one train to another mid track after an engine meltdown. Technical Difficulties. Doesn't Amtrak know Arabella has an exact bedtime prior to her own combustion? Despite best efforts, I won't come in under the wire tonight." Socialite Ivanka Trump suffered a public transport nightmare on Tuesday (14Aug12), delaying her trip home to 12-month-old daughter Arabella.

Tweet: "Ventured into the office for a few hours today but raced home to see Arabella this evening. I'm already experiencing separation anxiety!" New mum Ivanka Trump is having a hard time leaving her newborn baby girl to resume her business duties.

Tweet: "This may be the week that I become a mother... my due date is Thursday! I am beyond excited (and just a bit petrified!)." Socialite Ivanka Trump is due to become the latest star to give birth this month (Jul11) - Victoria Beckham and Kate Hudson both welcomed their babies over the weekend (09-10Jul11).

Quote: "My dad was joking the other day how he's going to have a new favourite little girl. He's over the moon, he's so excited." Ivanka Trump, who is due to give birth a baby girl on July 14 (11), insists her dad, business mogul and Celebrity Apprentice star Donald, can't wait to meet his new granddaughter.

Quote: "The toughest thing for me out of the whole Apprentice experience was sitting across from Ivanka Trump because she is smart, funny, witty, charming and beautiful. I kept thinking, 'Could we just have one last episode of (his dating show) ROCK OF LOVE in the boardroom?'" Poison singer BRET MICHAELS felt a strong attraction to Donald Trump's married 28-year-old daughter while shooting U.S. reality show CELEBRITY APPRENTICE with the real estate mogul.

Quote: "People love to say that - it's hilarious (but) it's no more obvious a comparison than between myself and George Bush. PARIS is fine - she is what she is - but her lifestyle wouldn't appeal to me." Ivanka Trump refuses to be likened to fellow heiress Paris Hilton. 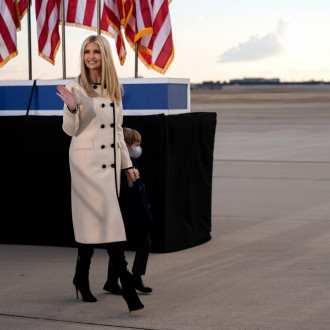