Review of Isle of Wight Festival 2010.

Getting to the Isle of Wight festival involves a fair bit of transport, you're not on any of it for long, but come the end of it, you feel like only a plane is needed to complete the collection. So after tubes, trains, ferry's and busses had been boarded, Contact music finally arrived at Isle of Wight Festival HQ in desperate need of a drink. Oh and a tent pitch. I couldn't possibly say which task was tended to first, but safe to say, it didn't involve an instruction manual. 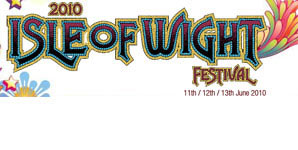 By no means in chronological order, a drink was had and a pitch was found, all in time to see Hockey take to the main stage, racing through tracks from their promising debut Mind Chaos and doing so with a swagger. However, it wasn't until Doves took to the stage that the day really took off, reeling off their batch of hits as well as elements from recent album, Kingdom of Rust. Seaclose Park was finally warmed up and ready for Friday nights mainstream treats.

With the sun now out after an indifferent start, Calvin Harris took to the stage. With tracks such as Ready for the weekend, he couldn't have really played any other slot. Being his amusingly/irritating cheesy self, the Scotsman brought with him his collection of smash hit singles, readymade for mainstream festival crowds, and he didn't disappoint. He worked the crowd effortlessly, but you got the feeling his aesthetics would have worked a lot better in the Big Top tents surroundings.

It was then time for Florence and the Machine to don the main stage, up until now the Big Top tent had offered little alternative to that of the Main stage, but all of a sudden the dilemma of Florence vs. Marina came in to play. Why the two were pitted against each other is mind boggling, they clearly share the same fan base and would have complimented each other's sets perfectly. Flitting between the two became the only option. To help me, I could have done with one of those golf buggies that Absolute Radio were using to drive artists around the backstage area, but apparently I don't command as much respect as Dappy and Co., so offers were not forth coming. Opting for Marina first proved a good choice; I arrived in the Big top just in time to catch her single America send the big blue tent into ecstasy. Wearing a novelty bikini T-Shirt, Marina was pitch perfect throughout, effortlessly recreating the sounds of her debut album and adding to an already growing reputation. However the fun had to be cut early and it was off again to the main stage to catch every fashion magazines favourite; Florence and the Machine impress the masses during the second half of her warm up set.

Having triumphantly passed his Glastonbury examination, Jay-Z stepped onto the main stage with nothing to prove, he had already broken the mould of generic headline acts and was simply taking part in his victory parade. This was the Brooklyn rapper enjoying his new found status as festival headliner and mainstay, and he did so with predictable flamboyance. He wowed and enthralled a crowd that were made of music fans of all different genres, not necessarily hip hop fans but music fans that knew when they were being entertained. The difference between Glasto Jay Z and Isle of Wight Jay Z was the emergence of N.Y State of Mind as an anthem, even without Alicia keys, it had the thousands of captivated festival revelers singing at the top of their voices.

Saturday brought sun and lots of it, a lot more than the forecasters had predicted, and yours truly got caught out big time! So as I purchased some overpriced, no brand, sun cream that might as well have been salad cream, I mulled over which acts would receive my sun burnt presence.

One band I wasn't particularly looking forward to seeing were Blondie, I had my doubts about how they would sound, were they just going through the motions for the money? As it turned out, I had nothing to worry about, they cast the doubts aside as they ran through their array of classics with precision, making them sound as tight and energetic as they ever did and impressing all that stood before them. Considering they were competing with the football, Debbie Harry and co got one hell of a turn out and probably left a few people wishing they'd given the football a miss instead.

Just before the end though, it was time to head off to the Big Top stage to catch La Roux, the tent was full to the brim with a younger audience than that of Blondie, all eagerly awaiting her arrival on stage. And arrive she did, to the sound of thumping beats, sporting a black cloak equipped with vampire collar she looked every bit as theatrical as her set list. Despite some irritating technical faults throughout, the set was a success with huge hits In for the kill and Bulletproof bringing the house down and signifying a duo on the brink of big things.

It was then off to the main stage again (told you I needed one of those buggies) to watch the Strokes put on the kind of out and out Rock n Roll performance the festival was so far missing. Starting with New York City Cops, Julian and the boys reminded us what the music world has been missing in their absence. Despite a lack of new material, it was still a joy to watch such a musically tight band take us through the best of their first three albums.

By Sunday, the mud had dried and there was only one word on everyone's lips. Paul McCartney! But before the great man could take his bow, there was a mouth watering day's line up to contend with. The day's events kick started with enjoyable sets from Isle of Wight third timer Suzanne Vega and swaggering Mancs the Courteeners with the latter being unlucky to be playing so far down the bill. This was all before St Albans trio Friendly Fires arrived to give a flawless performance (as long as you ignored singer Ed Macfarlane's dodgy dad dancing) in the midday sun.

What happened next is something I never thought would happen in my life. I watched Spandau Ballet live. Of all the 80s revival groups on the IOW bill (and there were lots) Hadley and co seemed to be the most in demand. Sporting a brilliant white suit, Tony Hadley belted out the likes of Gold and True like it was all, one big 80s wedding disco. Yes I stayed until the end. Forgive me father for I have sinned.

The Editors seemed out of place in the late afternoon sun, their maudlin yet enjoyable set couldn't have contrasted more with the previous heavy handed helpings of guilty pleasures but they impressed all the same, especially with their newer synth based material.

If the Editors were chalk and cheese with Spandau, then the arrival of Pink certainly shook things up. Unable to rely on the 'strength' of her songs, the US pop star instead put on an acrobatic show that used all space available, this included using a giant hamster ball which she climbed inside before rolling into the crowd. Breathtaking stuff!

The question as this point was; How is McCartney going to follow that? Is he going to have to pull out the Frog Chorus? Nope he just popped up and played some Beatles songs instead. Because, for all the stage tricks in the world, when you have a back catalogue of songs with the quality that Sir Paul does, you don't need to climb aboard a harness. Playing for an epic two hours, 'Macca' gave us a mixture of songs old and new. Most recent track 'Dance tonight' blended in well amongst a wave of classics such as a half acoustic Something and Ticket to ride. The fireworks and pyrotechnics came out for Bond theme Live and Let Die, before a venomous version of Helter Skelter proved the highlight of the encore. Then amongst tributes to Jimmi Hendrix and the mandatory Hey Jude sing along, there was a poignant and heartbreaking tribute to his 'old friend John'. An acoustic note penned to John Lennon himself, featuring the words McCartney wished he had said before it was too late.

But it was soon time to go, and as McCartney waved goodbye, and the end of festival fireworks lit the sky, the heavens decided it was as good a time as any to open. 50,000 people trudged back to their tents (or beer tents) singing Hey Jude and another Isle of Wight festival came to a glorious end. One thing for sure though, they'll all be back next year for more of the same.