Picture: Isaac Hayes live in concert at the Shepherds Bush Empire in London on 03-08-2007. The 65 year old singer, songwriter, famous for the theme...

Isaac Hayes' longtime guitarist Charles Pitts has died after a long battle with cancer.
The musician, also known as Skip, passed away on Tuesday (01May12) in Memphis, Tennessee. He was 65.
Pitts grew up in Washington, D.C. and learned all about guitars and music from his neighbour, rock n' roll legend Bo Diddley.
His skillful training helped him land his big break at the age of 17, when he performed on Gene Chandler's hit song Rainbow '65.
Pitts went on to work with Wilson Pickett's Midnight Movers and the Isley Brothers' band, with which he landed another hit with It's Your Thing.
But it was his work with Hayes which brought him the most recognition - he was the man behind the distinctive "wah-wah" guitar style prominently featured on the classic Theme from Shaft, from the hit 1971 Blaxpoitation film.
The song earned Hayes an Academy Award and was the start of a 30-year partnership which also saw Pitts collaborate on director John Singleton's 2000 remake of Shaft, starring Samuel L. Jackson as the title character.
He later contributed to the soundtrack for animated comedy series South Park, on which Hayes voiced the character of Chef.
Pitts also served as a session player at the famed Stax Records in Memphis, working with Al Green, The Soul Children, Albert King, The Temprees and Rufus Thomas. 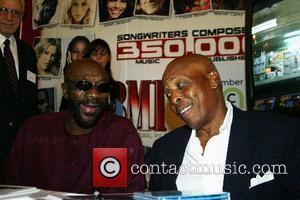