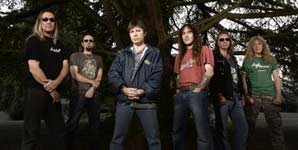 Following the announcement of the forthcoming early September release of their new studio album 'A Matter Of Life And Death', Iron Maiden announced the news that 'The Reincarnation Of Benjamin Breeg' will be released as a very special single on 14th August.

Says Steve Harris, "This is a very intense album in many ways and we really wanted to go with a lead track that demonstrated that in the best way, rather than going for a shorter track on the album just to please the chart rules. 'Benjamin Breeg' is a great example of the feel of the album in its really heavy riff and lyrically it's a very dark, atmospheric and powerful song which really epitomizes what the album is all about for us. So it made a natural choice for us."

Iron Maiden undertake a massive Winter European Tour that opens in Denmark on 9th November, culminating in eight UK arena dates at the end of December (including two nights at Earls Court Arena). They will play to 90,000 people in the UK alone!

Iron Maiden – The Writing On...

Iron Maiden, The Reincarnation of Benjamin...

Iron Maiden, Death On The Road,...