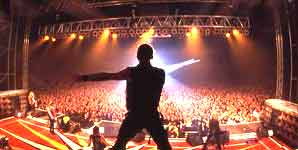 Iron Maiden have now confirmed the release date of their much anticipated DVD release Death On The Road for 6th February 2006 through EMI Records. This will initially be available as a limited edition special digipack. The DVD contains the full performance of their 'Dance of Death Tour' in December 2003. Filmed at the Westenfalenhalle Arena, Dortmund the show has been personally edited by founder band member Steve Harris, to fully capture the magnificent stage production and to cut right to the heart and the electricity of the bands' performance. Over a four month period Steve made thousands of edits, thus ensuring he was personally happy with every single shot included!

To ensure top quality and to avoid any compromise in reproducing the very best possible sound and picture quality, the band have taken the unprecedented step of making the full concert available on two separate discs – one with full traditional stereo soundtrack and the other with specially mixed 5.1 sound by Kevin "Caveman" Shirley – which along with the special features disc makes three discs in all.

The special features disc contains an exclusive documentary directed by Matthew Amos who also directed the bands' award winning 'Early Days' documentary. It's an insight into the production of the 'Dance of Death' album from its writing and recording through to the detail in what it takes to get a massive show like Maiden on the road.

As usual we have crammed as much as possible into the DVD with a host of extras including all of the promo videos from the album, background interviews with members of the production crew and fans during the tour, artwork, design sketches and photo galleries. Many hours of Maiden mayhem with a total running time of over three hours – and that's just the special features".

The band are now taking a well deserved break following their hugely successful touring schedule this year, having headlined virtally every major festival in Europe including Reading and Leeds here in the UK, as well as taking the USA by storm on this year's Ozzfest bill.
Preparations for the next studio album (their 14th) will begin in February with recording commencing in the Spring of 2006.

The full set list from the show is:
Wildest Dreams
Wrathchild
Can I Play With Madness
The Trooper
Dance Of Death
Rainmaker
Brave New World
Paschendale
Lord Of The Flies
No More Lies
Hallowed Be Thy Name
Fear Of The Dark
Iron Maiden
Journeyman
The Number Of The Beast
Run To The Hills

Iron Maiden – The Writing On...

Iron Maiden, The Reincarnation of Benjamin...

Iron Maiden, Death On The Road,...