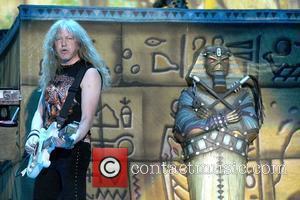 Iron Maiden star ADRIAN SMITH has revealed he used to take a bucket of maggots and worms on tour with him, so he could go fishing at every opportunity.
The heavy rocker, who is Britain's current chub-fishing champion, tells U.K. magazine Angler's Mail he was so obsessed by his hobby he'd look out for rivers, canals and lakes on tour stops.
He says, "I get to fish a lot of wild and wonderful places on tour. We used to keep worms in containers under the tour bus and in summer they would get a bit savoury.
"I also remember a maggot scare in a very plush hotel in Amsterdam when I was fishing in the canal there. They're certainly not on the room service menu."