Maiden Keep It Simple On Tour 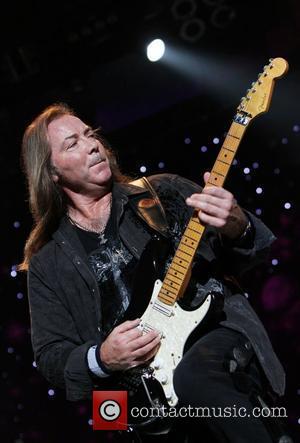 Rockers Iron Maiden are shunning the trappings of fame - they've scaled down their backstage rider to a simple list of tuna sandwiches and a few beers.
The Number of the Beast hitmakers are disgusted by bands who insist on their dressing room being stuffed with expensive food, mountains of booze, and bouquets of flowers.
So they only demand some bread, butter and tuna - and guests are told to make their own snacks if they are hungry.
Frontman Bruce DICkinson tells Britain's The Sun, "I loathe all the celebrity c**p - all the minders, the backstage b**locks. We hate it all. We are all about the music. If we could beam ourselves back home after a show, we'd go to the shops as if nothing had happened. The rest is just fluff. It's nice but it's b**locks in the grand scheme of things.
"We got rid of most of our rider. We just have three loaves of white bread, some butter, a tin of tuna fish and some beers. People come backstage looking for the spread of food and we say, 'Go make yourself a sandwich'. And we don't want vases of flowers. Do we look like the sort of blokes who have flowers in their dressing room?"