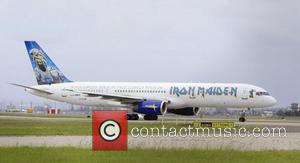 Heavy rockers Iron Maiden staged a show of soccer skills when a power outage stopped their Sunday night (15Jun08) show at Madison Square Garden in New York.
Fans like new couple Kate Hudson and Lance Armstrong watched as frontman Bruce DICkinson and his bandmates used the silence to kick a soccer ball about onstage.
The power cut killed the sound at the show, ironically in the middle of the song Powerslave, but the stage lights remained on.
Technicians worked on the power problems for 10 minutes until normal service was resumed and DICkinson joked his long-running feud with Sharon Osbourne was to blame, quipping, "Ah, the revenge of Sharon, the wicked witch of the west!"