Review of The Constant One Album by Iron Chic

About as metal as they are fashionable, Iron Chic delivered their newly forged album 'The Constant One' in early December; seemingly more than happy to merely carry on where they left off with the 2010 debut album 'Not Like This'. The typical "breath of fresh air" plaudit is hardly an apt description for this particular album; generic, clichéd and "not 'Not like this'" would be a closer description of this latest effort from the Long Island quintet. 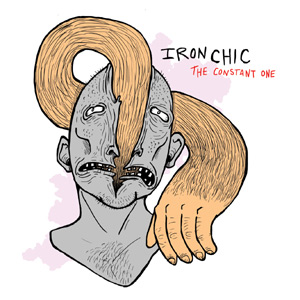 'The Constant One' is the band's first album working with Bridge Nine Records, who also happen to boast New Found Glory and Gallows on their books. Sound-wise, this album slots snugly between the two aforementioned bands, managing to sound slightly heavier and more angst-ridden than New Found Glory without having to resort to the undecipherable shrieks employed by Gallows.

The album starts off with a short prelude, 'The End', not only borrowing the title of My Chemical Romance's prelude in 'The Black Parade', but also echoing the melody of Smashing Pumpkin's 'Today'. However, this is where the comparisons to these two bands end.

One thing that Iron Chic can't be accused of is deviating from their style; combining fast, upbeat pop/punk melodies set against dark, brooding lyrics (in an almost identical fashion to their 2010 debut) , this is a formula they clearly believe works for them. In an age where every band under the sun are experimenting with implementing hip-hop/techno influences, it's refreshing to see a band sticking to what they (and their fan base) appear comfortable with.

'(Castle) Numbskull' is one of the strongest jams on the album and epitomises what this band is all about. It's full of dark lyrics about being 'lost', having a metaphorical 'darkness' inside of them and not being able to 'feel a thing', before diving into a catchy chorus which makes you want to sing along and join in their endless cycle of becoming lost, feeling depressed and being found again. If you listen to this track and decide it isn't for you, be wary of delving any deeper into this album - you won't find anything different.

In short, if you're absolutely in love with the punk sounds of the late 90s/early 00s and want to relive the nostalgia of your early teen angst phase then 'The Constant One' is well worth a listen. However, if you want to experience something a little more fulfilling, you would be advised to give this effort a wide berth, otherwise you'll be subjected to a 'True Miserable Experience'.