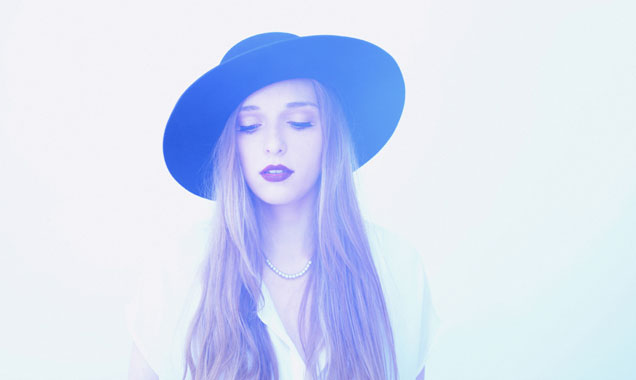 An Interview with Verite

With one of the most quirky personalities in the music industry, New York pop virtuoso Verité has just unveiled her second EP 'Sensations', featuring the standout singles 'Colours' and 'Wasteland'. With the former single recorded with MSMR's very own Zach Nicita, Verite drew inspiration from a variety of sources.

She opened up to us at Contactmusic.com while she was in the UK about 'awkward' collaborations, her favourite music right now and how her family has helped her get where she is.

Hey Verité! How are you doing?
I'm phenomenal. We are in Brixton, London in this venue posted up for the day and I'm eating clementines - those little oranges. They're sort of my lunch; if you put food in front of me, I will eat it.

We can relate to that! You worked with Elliot Jacobson on your last EP - what drew you to work with him?
I guess it was kind of a 'why not?' moment. He messaged me on Twitter and we sent a bunch of messages like, 'What are you listening to?' Eventually Elliot suggested that we collaborate. I wasn't working on anything at the time so it happened quickly and very naturally. I remember that the first thing we ever worked on was 'Heartbeat' but by the end we had about 10 songs done, so we just had this whirlwind musical relationship.

We read that for the first six months you barely saw each other - did you find it productive working in that way?
Oh yeah, but it was horribly awkward. I'd have these moments of, 'Maybe he hates me?' He was on tour and I was working 60 hours per week as a waitress. We never saw each other but we had this body of music. Then we finally met over dinner; it was like a first date - he's married, so it wasn't - but we got Mexican food and just sat there like 'Hi'. Obviously with me we're going back and forth with the production ideas, but I was sending lyrics that are transparently personal; there's no getting around it, so he knew me way better than I knew him. So there were definitely awkward moments!

You've said that you were listening to hip-hop while writing 'Strange Enough' - were you looking for inspiration or just listening for the enjoyment?
For the enjoyment. I tend to go through phases. I'll go through a month or two where I'm constantly searching and listening to a lot of different music, but every few months I must listen to nothing new, so it really depends on which day you catch me. Recently, I've been on a really serious Childish Gambino kick; it's been intense. Other than that, I just started listening to Jack Garratt; he's really fantastic. While I was actually writing 'Strange Enough', I was listening to The Age of Adz. Lots of Drake as well, and some post-rock. I was into Godspeed You! Black Emperor, and everything from pop and folk to synth.

Do you find that whatever you're listening to usually rubs off on your song writing?
Yes and no. I feel like the inspiration of it does; every once in a while I'll find myself in a creative box, and then I'll listen to something else - I'm currently really into the new Kendrick Lamar record - then you realise that music has no limitations and creativity has no limitations, so I can actually explore whatever I want to and do whatever. I feel like having a really broad musical palette helps you to do that.

Being at the start of your career, you must have learned a lot in a short space of time. What is the biggest lesson you've learned so far?
To take risks, such as coming over to the UK. As an independent artist, everything you do you want to do right to have the maximum impact. You can't do that without taking risks and putting in the effort, but it's been a remarkable experience coming to a different country. Having people show up to gigs and them knowing the words to songs has been a dream.

Have you been excited about the release of your new EP 'Sensations'?
It's always nerve-wracking in a sense, but everything has been received extremely well, which I'm shocked by, so the pressure is on. I say that, but I feel like it's probably false pressure that I've put on myself. I love the music, and I understand that as long as I keep making music that feels right and is authentic, then I'll keep enjoying it.

You worked with Zach Nicita (from MSMR) on the single 'Colours' - what was it like working with him as a producer?
It was great. It's kinda funny how easily that dynamic ended up working out. He and I worked in the same way as I did with Elliot, we did everything remotely. We'd get together to track vocals and to edit, other than that it was just a lot of emails back and forth. But he's really, really cool. That track was more produced than anything Elliot and I worked on, so it became this new task of writing something so dynamic and driving, so I knew that what I added had to match that. On this song, you can hear two distinct voices and I think that's really cool that I'm almost coming into my own, as the cohesive thread that will run through each of the tracks that I release.

What kinds of people do you feel most comfortable working with?
Definitely people who are very good at what they do and who have skillsets that are not my own. I'm not really interested in bringing a bunch of top-liners onto the project or working with people in that capacity. For me, Zach and Elliot are so brilliant at what they do, so I feel very confident in what I do. It's very easy to collaborate, because they're quick to be like, 'You need to change that word, or that melody won't work', and we can comment on each other's work. I trust them.

Are there any particular skills you want to learn or improve on?
I think I'm definitely working towards being better at producing. I recognise that I will probably never be a producer, but I just want to have a better understanding of the software and how things work - especially for demoing, because I demo everything myself. I'm just becoming more comfortable.

Your father and cousin are also both musical - did they have a lot of influence on you?
I think, if anything, they wound up inspiring me. My cousin is the first person I ever wrote music with, so obviously that is a huge catalyst for all the work that I've done. The first shows I ever played, I played with my father on acoustic guitar, but their styles were very different: my dad was in a Latin band and my cousin does everything. He's phenomenal.

Did you learn a lot of other instruments apart from guitar?
I tried to play violin, but it didn't work out very well; I didn't really make it past the squeaking phase. But I played classical piano when I was a kid and I played guitar in a few rock bands, but piano is definitely my main instrument. I would love, love, love to become competent on drums. Just, if anything, to have a better understanding of rhythm, but right now it's pretty abysmal.

Is there any particular song or artist that really made you want to get into songwriting?
I remember listening to Death Cab For Cutie. It was probably one of the first times I thought, 'Oh, lyrics are a thing!' I grew up listening to 90s alternative rock, Nirvana and stuff, but I never paid attention. I just remember listening to that Death Cab album and thinking, 'Oh wow, that's beautiful'.

Who has helped you most in getting to where you are now?
Everyone. I wanna say my mom and my family. I feel like all the people that I've brought into this little world have all been really supportive. My mom ends up yelling at me the most to take risks when I don't wanna take them. I'll be like, 'Should I go here?' and she'll say, 'Go to Europe! Jeez!' She's over the questions by this point.

You're currently living in New York. How has that affected your sound?
Just being able to be in a place where no one really cares that you're there and you can operate as a fly-on-the-wall very easily, I like that. I like that fact that I can literally just go find a bench a few blocks from my apartment, get whatever kind of food I could ever want, and just sit.

Where can people hear you next?
Over the summer, we're doing a few one-offs. We should be doing New York in June, Lollapalooza and Firefly, then I have some on the West Coast of the States in July. I'm a bit too busy for any touristy things, but I love just walking around with all the sessions, all the meetings, you just get to immerse yourself in a place and I think that's the best part.