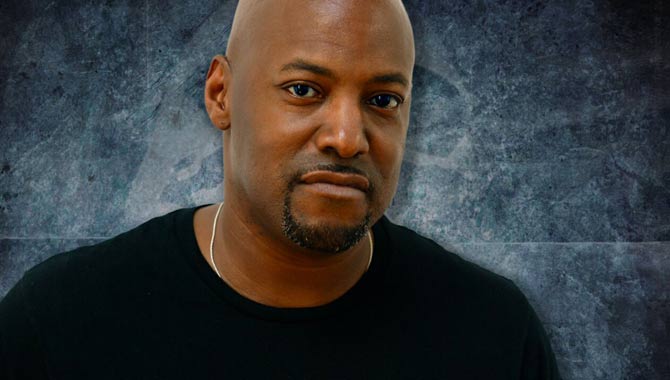 An interview with Tomas Doncker

Tomas Doncker first made his mark in the "No Wave" scene of the early 1980s, where he played with groups like James Chance & the Contortions and Defunkt. If languages were akin to musical instruments, Doncker would be considered multi-lingual. He sings and plays guitar, bass and keyboards. Doncker has utilized his talents with luminaries like Bootsy Collins, Yoko Ono, and The Itals. And he hangs with Bonnie Raitt and Corey Glover. A prolific songwriter, Donker's latest release is entitled 'The Mess We Made'.
Hoping that he might consent to sit down and talk, Contact Music approached him about an interview. With great gusto, Doncker agreed. During the interview, it became obvious that Doncker is infused with a zest for life and that he does everything with great gusto! He's fun and he cares about people.

Contact Music (CM): What's your favorite song to belt out in the car or the shower?
Tomas Doncker (TD): HAAAAH!!!! That's a long and varied list-it could be anything from Bukka White,to James Brown to David Bowie. It depends on what kind of morning it's been!

CM: What kind of guitar do you play, and why?
TD: I've been fortunate enough to have developed a relationship with Collings Guitars (out of Austin,TX). Truly the finest guitars on the planet! I also use and endorse Jarrell guitars. I recently acquired a 1962 Gibson ES-175. In fact I wrote most of "The Mess We Made" on it. Each guitar has a very specific voice and vibe, and I love all of my instruments. I also endorse Fuchs amplifiers, really great people (thanks Annette & Andy Fuchs!), who also happen to make a Killer amp!

CM: What musicians influenced you the most?
TD: Producer/Bassist Bill Laswell is a major influence on everything I do. We do all of our recording at his studio, and it was Bill who introduced me to my production partner James Dellatacoma. James produced 'The Mess We Made'. I truly admire Bill's fearless approach. But I'm also very influenced by artists in other fields. For example Pulitzer Prize-winning poet Yusef Komunyakaa is a major influence on me. We've done two albums together.

CM: Of the many places you have performed, which was your favorite? And why?
TD: I have no favorites as far as that's concerned. We make it our business to make every gig a great one, whether it's in front of 500 people or 5,000.

CM: What music have you listened to lately? Does listening to other bands and/or singer-songwriters tempt you try something completely unusual? For example, let's say you listened to Shania Twain. Would you ever consider doing something with a country western flavor?
TD: I've written and produced contemporary country records in the past and enjoyed it immensely, but I don't think that's really what you mean. I do my best to stay abreast of "What's Happenin" out there, but I wouldn't say that what other artists are doing is any influence at all on what we do. As far as doing things that are considered "unusual"...well, we do what We want, when we want.

CM: In my review of your album, 'The Mess We Made', I describe your musical style as having its roots in Chicago Blues. How would you describe your style?
TD: Blues is the foundation of all contemporary Pop Music, no matter what the supposed genre might be. It is certainly the backbone of what I do. 'The Mess We Made' is a modern "Rhythm & Blues" album.

CM: How did you come to write the songs on 'The Mess We Made'?
TD: It was a cathartic reaction to the Charleston church massacre and all of the events leading up to it. Since that day, Man's continuous inhumanity to his fellow man has not slowed down a bit. I find it hard to believe that in 2015, we treat each other with such disregard. Quite shameful, really. I couldn't NOT say something.

CM: 'Political Statement' music sometimes works and sometimes doesn't work. Some musicians might consider such an album a career risk. Did you ever ponder that possibility? If not, why not?
TD: First of all, great music transcends. It elevates and transports us to different places, to different states of mind. It opens the doors of healing and tolerance. Its mere existence makes us better! I've always wanted to be a part of that story. My participation in that far outweighs any so-called "career" I might have. No regrets or hesitation on my end as far as that's concerned.

CM: What kind of acceptance has 'The Mess We Made' enjoyed?
TD: Quite a bit across the board. The P.R. campaign has really just started and we're seeing a tremendous response already. My only intention with this album is to start a conversation, and I'm very pleased with the results so far.

CM: Where do you find inspiration for your songs?
TD: Everywhere. Literally.

CM: Your voice has more range than I thought it did. Has this always been the case or do you constantly work to improve your vocal range?
TD: Thank you! I'm always working on my tone and approach to singing. I must specifically thank my vocal coach Greg Drew (who has also coached Lenny Kravitz and Living Colour's vocalist Corey Glover) for helping me get to the next level.

CM: Are you touring now?
TD: We're doing a launch party/gig the day after Christmas, and the tour starts at the end of January.

CM: When will you go back into the recording studio? And when you do, do you foresee the next album reflecting the Blues or might fans expect something totally different?
TD: I'm ALWAYS in the studio. Always writing, producing and creating. We're developing a few musicals, one in particular, "Diana & Navy & The Golden Tooth"(written by the amazing Ms. Phoebe Nir) is quite exciting. It's a "Post-apocalyptic-Psychedelic-Roots Rock-Girl power-adventure-drama"! She's a real joy to work with and we plan on premiering the show sometime in 2016. We're also very busy preparing new releases for my label (True Groove). Look for debuts from longtime collaborator/songwriter Charlie Funk (featuring guest appearances by former P-Funk members Amp Fiddler, and Michael "Kidd Funkadelic" Hampton), legendary trumpet assassin Mac Gollehon's "Hispanic Mechanics"(a "Latin Electronica" tour de force!), "Alt-Soul" diva Candice Anitra's "Black Body" E.P.(Featuring a guest appearance by Meshell Ndegeocello),as well as a thrilling new release from True Groove SVP Marla Mase: "Miracles, Lost & Found". We stay pretty busy.

CM: My favorite song on the album is 'Still Haven't Found What I'm Looking For.' How did your cover version grow out of U2's version? Did you try variations of it or did it just materialize magically?
TD: We've been performing it for years, though it was only when we decided to put it on 'The Mess We Made' did the middle section really come together. Did you recognize it? It's a quote from a Sly Stone tune Called 'The Same Thing'. I'm very proud of our version. Perhaps you could send it to Bono. I'd love to hear what he thinks of it. Maybe he'd let us open for him...

CM: I'm a sucker for good drumming. Who played the drums on the album and where did he learn his style?
TD: HAAAAH!!! We were in between drummers at the time, so James (Dellatacoma, who produced the album) did all the drumming/programming. Pretty Phenomenal, eh? He's a wizard, a true star! We used his "drum concept" as the criteria for our search for a replacement in the band. I'm very happy to announce that James "Whoop" Coley is our new guy behind the kit and he brings ALL THAT, and then some. He's very fluid in his use of electronics combined with straight ahead kick-ass drumming. We've been having a blast putting the new show together and can't wait to share it with folks around the world.
Randy Radic