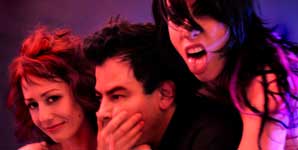 Grappling with 80s rock and giving it a modern kick to add pulsation and provocation that leers out in tracks such as 'Give Me' and the attitude rocking 'Somebody', makes the cosmopolitan outfit, The Human Value a gripping prospect on the brink of their debut album release. Vocalists Turu stands on the front line like a tiger, with her proudly prowling style that is elevated by the grinding guitars and coating vocals of Hiram. The percussive bite of Lynnae Hitchcock grips the tracks as masterfully as Grohl used to with Nirvana, often taking the sound away from the expected direction to facilitate the variety of the gang. The guys unlock the secret to their rock de force.


1. The Human Value has been reached through forays in intriguing outfits such as Kittens For Christian and The Send Effect and you're quite a cosmopolitan outfit. Was there a defining moment when your visions joined together? Also, how have your past experiences shaped this current project?

Turu & I (Hiram) had collaborated many times in the past, including her singing backup vocals on the last Kittens for Christian album. The moment came when I realized my band was ending and I suggested that we begin a project together. The very next day, we were writing a record and within three months, we were recording in Nashville with Grammy-award winning producer, Bruce Bouillet.

In our past projects, we were able to lay the groundwork for what we do now, but there was a certain symbiosis that occurred when we began collaborating that had not been achieved in previous projects. Basically, we both committed to pursuing this project above and beyond any other part of our lives. We were willing to sacrifice it all for this band.

2. The first impression many people in the UK had of your sound was in 'Give Me' that captures a buzzing sound and shakes it as though it's a poor man's money box, to produce Blondie-eqsue provocation and XTC style eccentric frivolity. What is the tale behind this and what made you chose it as being many people's introduction to your music?

The song's meaning is actually quite literal. We believe that everyone feels the desperation to satisfy his or her needs, almost to the point of begging. It's our humble attempt at channelling a visceral emotion that really can't be explained. Therefore, we felt it was a good song to lead with, because it is identifiable and fun…wait till you hear the new remix!


3. 'She' is one of your most intriguing offerings to date, for the fact that it Illuminates certain elasticity in Turu's vocals, to give off a vibe betwixt Katie Jane Garside and Regina Spektor and deviates slightly from your New Wave revivalist sound. Is this a direction you were conscious of heading in or was it a natural partner for the salacious lyrics?

Interesting that you are drawn to this song…it was the first song we wrote together. The song, like all the others, invoked the kind of vocal style that it wanted. Each consecutive song also took on a life of its own, and we simply followed the leads we were given.


4. Which of your songs sums up your current mood and why?

Probably "Won't Be Long", because of its message of endurance and patience and unflinching belief in yourself and because we've just been enjoying playing it so much lately…It has great energy


5. How do you want to leave people feeling after they have witnessed a live The Human Value set?

Inspired, as if they've just witnessed something really honest and unique. Nothing is better than a performance that is not full of shit….


6. Your self titled album is released later this year. What in your mind is the prevailing mood on it? Have you achieved the sound that you want to achieve or are you still a band in transition?

Dark and brooding, contemplative and sexy with emotions exposed like a raw nerve. Both: we feel we've achieved what we set out to do, but we are always in transition.


7. What was the last gig you attended as a spectator and does it feel strange watching other artists? Are you constantly making mental notes on their performance?

Eagles of Death Metal. No, it's not strange – it's inspiring when it's a great band like that. It's not that clinical; it either moves you, or it doesn't.


8. Finally, if you could change but one thing about the modern music industry what would it be?

We'd be sitting on top of the heap!

Click here to watch the video for Give Me